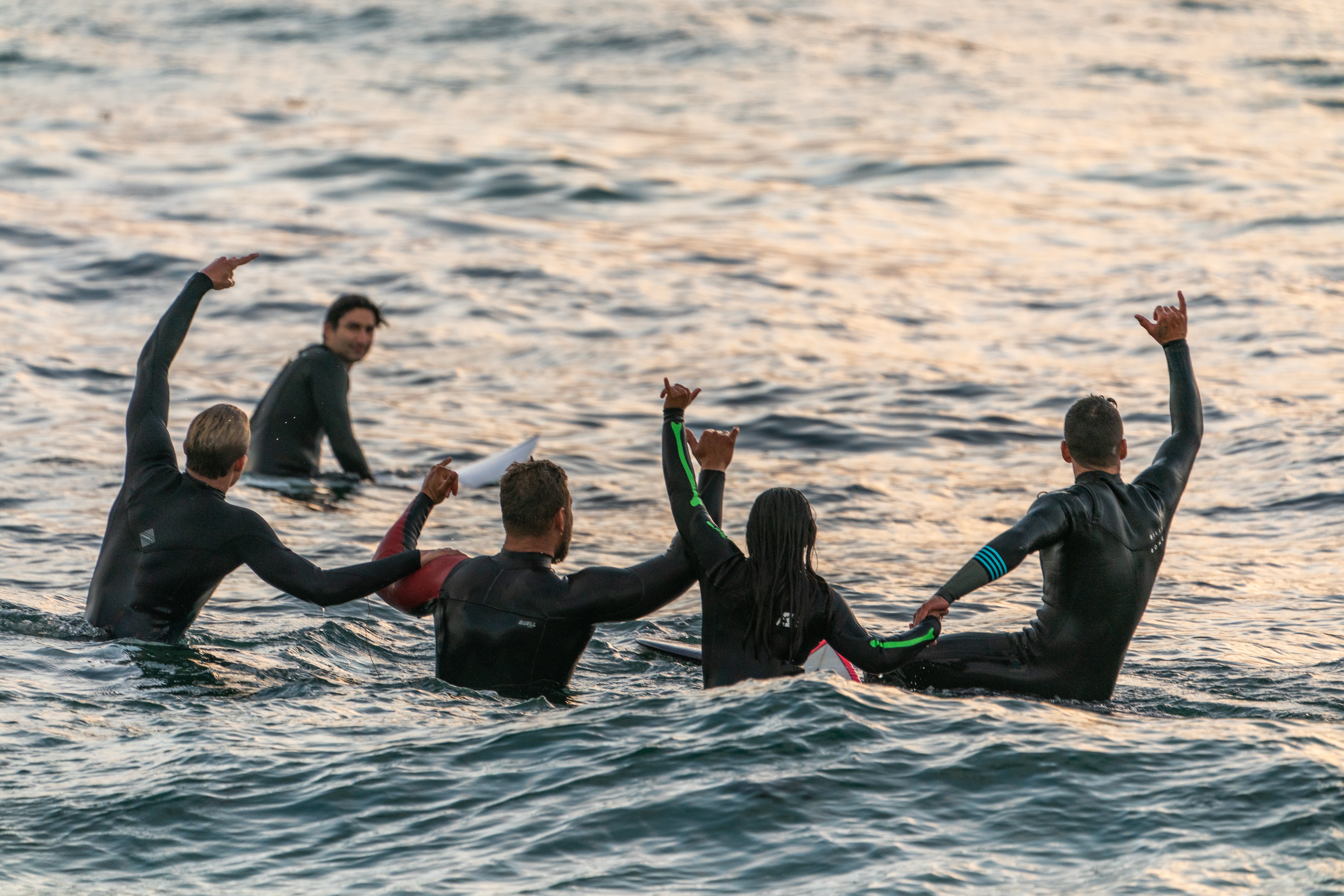 Before you venture out into the world of surfing, make sure you’re on the same page with your peers. Surfers have an exclusive way of talking, and not understanding a word they’re saying can REALLY make you feel like an outsider — or worse, a kook.

I’ve been surfing for many years now, and have conversed with other surfers of different genders, ages, and native tongues. Still, it’s surprising to me how we all instantly connect when it comes to the way we talk.

In this article, I’ll teach you all about surf slang and terms, and how I usually use them in my daily conversations. You’ll be able to catch up on inside jokes, engage in friendly chats, and impress other surfers with your fluency in Surf Lingo 101 in no time!

Accessory man- a surfer that wears all kinds of accessories at the same time i.e. reef walkers, visors, multiple rashguards under the wetsuit
Example: “If you ever need a rashies, I’m sure accessory man over there’s got a-plenty.”

Aggro- an aggressive surfer or way of surfing

Airplane wings- ugly longboards
Example: “Did you see that dude with airplane wings? Man, he almost hit me.”

Akaw- a term used for something shocking, rad, or awesome
Example: “Akaw! Yo, look at that wave. Dude’s looking like he’s gonna get pitted.”

Amped- the feeling of excitement before a surfing session
Example: “Today’s surf report’s got me amped up this morning!”

Axed- a heavy wipeout directly hitting a surfer
Example: “Dude, that wave has so much speed, it axed me straight to the face!”

Backdoor- to go inside a wave barrel
Example: “Amazing backdoor on that gnarly wave, dude!”

Bail out- to abandon or jump off from the board before or during a wipeout
Example: “Oh my god, that wave almost killed me I had to bail out.”

Barney- a derogatory term for a surfer rookie, untalented (see also kook)
Example: “Wow, the sesh today sucks. Too many Barneys out there.”

Beach bunny- women wearing bikinis who frequently tan at the beach
Example: “Brah, I see that beach bunny as often as I see you getting axed.”

Bilge- water or goo that comes out of boots
Example: “Dude, where did you swim? That bilge’s just plain nasty, man.”

Boots/booties- neoprene booties usually worn with wetsuits
Example: “I need to put on my booties or else I get reef rash.”

Brah/bro- surfer friend or buddy
Example: “Jeez bro, you need to practice in a surf camp or something or they’d be calling you Barney next.”

Choppy (similar to blown-out)- inconsistent wave conditions
Example: “Watch out for yourself out there, I heard we have some choppy waves today.”

Cliffhanger- snot or booger inside the nose that gets obvious in water
Example: “Dude, you better wipe off that cliffhanger before you talk to Betty.”

Clipped- to get hit on the head with a lip
Example: “You need to watch out, man. Getting clipped ain’t no fun.”

Coffee bomb- when you’re sitting out on a wave and then feel an urge to drop turd after drinking coffee
Example: “Dang, I wish I didn’t drink that coffee. I’m about to drop this coffee bomb.”

Contra-gear- a product in exchange for weed
Example: “Ey, Mike, I’ve got some contra-gear here in my pocket, dude.”

Crest- top point of the wave

Cutback- sharp turn or to change direction in the face of a wave
Example: “That cutback ripped the wave, man.”

Cutting off- also referred to as snaking, to cut someone off who’s next in the lineup of catching a wave
Example: “Ayo, that dingbat keeps cutting people off in the line!”

Deck-check- to paddle towards a big wave and back out last second
Example: “Dude went in for the bomb, but deck-checked before the drop-in.”

Dick-dragger (female: clam dragger)- a term used for surfers who can’t stand up on their boards yet
Example: “Dude, you’ve been dick-dragging for days, stand up, will ya?”

Ding- damage or crack to the board

Drop in- when a surfer closest to the peak dropped, then another surfer down the lineup cut off on the wave
Example: “Hey dimwit, why’d you drop in for!?”

Dude- a fellow surfer, can also be referred to as ‘due’

Egg beater- a surfer who sits on his/her board, blocking your way towards a wave
Example: “Hey, egg beater! Get the hell out of the way!”

Eggy- the feeling of dullness in the morning
Example: “Will take a rain check today, I’ve been feeling eggy since I woke up.”

Eskimo roll- to roll the board over to avoid being washed off the shore
Example: “Yo, that eskimo roll just gave me a glimpse of my future.”

Face- Forward position of the wave

Fish hook- to fall off the board and hit its fins

Ghandi– to leave
Example: “Mike went all Ghandi on us again.”

Goof troop- a couple of kooks paddling out simultaneously
Example: “Yo, watch out, the goof troop is heading this way!”

Greenroom- also referred to as glasshouse; the inside of the tube

Gun- big and narrow surfboards for riding big waves
Example: “What’s with all the guns taking over the Lane?”

Hodad- insulting term for non-surfers who imitates a surfer’s lifestyle; always at the beach but never surfs
Example: “If I ever see that Hodad surf, I’mma Hang Eleven.”

Impact zone- where big and heavy breaks are
Example: “Oh, brah, watch out, you’re nearly at the impact zone.”

Inside- may refer to inshore or inside the impact zone

Jacking- refers to when the shallow water hits the ocean floor, creating intense waves that grow in height rapidly
Example: “Whoa! Huddle up. The waves are jackin’.”

Jake- a beginner surfer that unknowingly causes trouble to experienced surfers; kook
Example: “Ayo, Jake! Do us a favor and stop egg-beating!”

Kickflip- to rotate the board 360 degrees while doing an aerial
Example: “Brah, check out this sweet kickflip.”

Kook- stereotype used for inexperienced riders; untalented surfer
Example: “Man, too many kooks out there. It’s making me eggy.”

Leash- cord strapped to a surfer’s ankle to prevent the board from floating away
Example: “Mate, one more wipeout and that leash is gonna snap soon.”

Lineup- the order in which surfers sit and wait for wave breaks
Example: “Everyone was bummed out when the jakes showed up in the lineup.”

Man in the grey suit- sharks (see also Noah)
Example: “I thought I saw a man in a grey suit, so I quickly pulled my feet up!”

Mushburger/Mushy- weak wave conditions
Example: “The waves are mushy out there, you might as well Gandhi.”

Namer- a surfer who reveals secret surfing spots
Example: “Yo, nobody tells that namer where we’re going.”

Noah- another term for sharks
Example: “Watch out little fishies, there are Noahs here.”

Noodle arms- tired and numb arms
Example: “Dude, I almost lost hold of my board because of these noodle arms.”

Nose- pointy end of the surfboard
Example: “Man, I was pumping, but as soon as dropped, I fell over the nose.”

Over the falls- wipeout where a surfer gets sucked up and tumbles over the wave
Example: “Dude almost went to the ER when he went over the falls.”

Paddlepuss- surfer or person who doesn’t stray from the white water
Example: “ Yo Barney, I could see how your training went with how you’re being a paddlepuss this morning.”

Peak- highest point of a wave

Pearl- a type of wipeout when the nose of the surfboard dives into the water
Example: “Oh snap! Jordan just pearl dived real bad.”

Pitted- to be caught inside a collapsing barrel wave

Quimby- annoying surfer; newbie
Example: “Ey, quimby! Get off this lineup before we bust yo ass!”

Quiver- a collection of surfboards

Rag dolled- when a surfer wipeouts so hard they get shaken underwater by the current as if a ragdoll
Example: “Man, poor Kenny got rag dolled when he went over the falls yesterday.”

Rail- the sides of a surfboard

Regular footed- opposite of goofy footed; surfers who ride the waves with their left foot forward

Right of way- surfers who are closest to the peak has the priority
Example: “Look at that little Quimby trying to steal everyone’s right of way. What a snake.”

Rock dance- movement made by surfers who are getting out of a rocky zone
Example: “Dude, check out that epic rock dance Brooke’s doing or something.”

Shubie- a person who poses a surfer’s lifestyle and buy surfing equipment, but doesn’t surf
Example: “Jeez, Shubie. Why don’t you put your quiver to a cause and give them a bit of a spin?”

Steamer- a wetsuit with long arms and legs

Stoked- also refers to being amped/pumped up; excited
Example: “Jimmy’s so stoked today he was also on dawn patrol.”

Sucking dry- when the wave breaks cause the water to be drawn off the sea; therefore exposing the seabed
Example: “That jacking before the water sucked dry was freaky, man!”

Surfer’s ear- unusual bone growth in the ear canal because of long-term exposure to water
Example: “Dude’s been here for so long he started growing surfer’s ears. Cool, huh?”

Tail- rear end/backside of the surfboard

Take-off- to begin paddling out towards a wave; to pop up before dropping in
Example: “Yo, man. I almost dropped in on you. I was just about to take off!”

Tandem surfing- when two people/surfers ride one board

Thruster- surfboard with three fins of equal length; two parallel fins, and one in the middle slightly backed up towards the tail

Tombstone- happens when a surfer gets wiped out and sinks underwater while their surfboard bobs up and down in the water surface like a tombstone
Example: “Mate, few more minutes of the tombstone and we would’ve called search and rescue!”

Trimming- to ride or cruise smoothly in a wave line

Turtle roll- to hang on the rails of a surfboard and turn it over so it’s fully submerged; a technique used to get the surfboard through a breaking wave

Wall- a wave with no area to surf on

Washing machine- to spin or get rolled underwater by a wave
Example: “We went straight to the wave! It’s a washing machine world right there.”

Wave hog- surfer who catches (and not share) all the waves
Example: “Man, sit your ass down and quit wave hogging.”

Wax- sticky wax applied on the surfboard to improve traction

Wettie warmer- to pee inside the wetsuit to make it warmer
Example: “Man, the water’s so cold I just had to pull a wettie warmer.”

Wipeout- to fall off the board when catching a wave
Example: “Jeez man, glad you’re still alive after that nasty wipeout.”

Learning a few surf words can put an end to those awkward smiles and nods because you don’t understand a single word the other surfers are saying. It also paves your way into the surfing world if you’re a newcomer.

And so there you have it! I hope I’ve enlightened you with this mini-glossary of surfers’ vocabulary. As a final touch, don’t forget to sprinkle the slangs with a little bit of surfer accent. For reference, watch this cool guy in the video below.

Q: What are the usual things surfers say?

Some popular words surfers use are stoked and rad to refer to an awesome event, wave, or technique; dude or bro as a label for a surfer friend; and Barney or kook for untalented and beginner surfers.