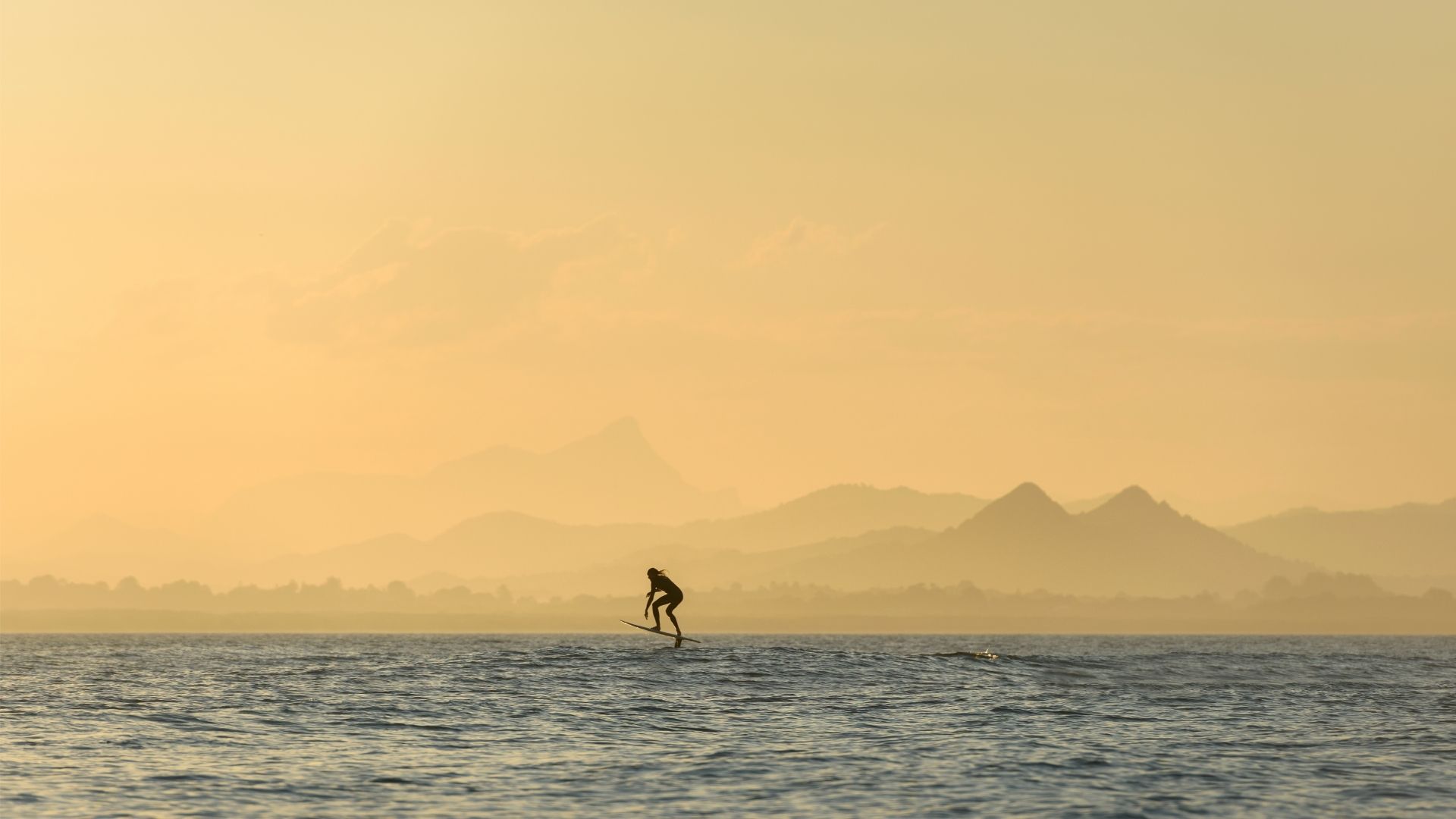 In 2003, Laird Hamilton brought hydrofoiling to the masses in Dana Brown’s “Step into Liquid.” His scene put a glimmer in surfing’s eye when he surfed absolutely gigantic waves on hydrofoils. It put him at the forefront of surfing’s most significant movement, efoiling. Years later, foils can be found in lineups all around the world. Efoils offer efficiency to let surfers do things they’ve never done before. Now, the market has big players of efoil or the electric-powered board equipped with a mast and wing. One of them is Fliteboard Pty. Ltd.

Find out with Fliteboard is one of the market’s most prominent players in the efoil industry with our in-depth Fliteboard reviews.

Who Is Behind Fliteboard? 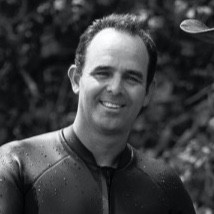 David Trewern, the founder of Fliteboard, grew up surfing and windsurfing. In one of the kite foil events he attended in 2016 where there were no winds, an idea struck to add an electric motor to his foiling kiteboard.

He had nothing but his kitchen as his workshop. He went into overdrive with his 3D printer, and after a dozen prototypes later, his Fliteboard flew for the first time.

Today, Trewern’s global team of experts consists of 40 permanent staff across four offices – two in Australia, one in the Netherlands, and one in New York. Fliteboard family also grew to include a dynamic network of authorized resellers and Fliteschools.

Fliteboard promises an ultimate ride with its efoil models. Shopify founder Tobias Lutke describes it as the most magical gadget on the planet. Here’s what we think about Fliteboard and its innovations.

Trewern’s Fliteboard is the most awarded innovation with its six patents and a few more pending. Every Fliteboard efoil package can be broken down into different vital components – the board, the Flitecell (battery), the unit that connects the battery to power the motor, the mast, and the fuselage.

Fliteboard’s innovation has too many intricacies, but its marine battery is considered one of the most impressive features it has. Not to mention it is emission-free. This technology took Trewern 7 different batteries to try with 20 prototypes for each trial.

It all resulted in an entirely waterproof Flitecell that offers 60+ or 90+ minutes of runtime or range, respectively, for an average adult male rider.

Fliteboard efoils are a healthy balance of strength, performance, and weight savings. All of these are achieved through its interwoven carbon fiber for its board and fins, expert precision during aluminum mast crafting, and powertrain to within millimeters of accuracy.

These are recorded in a dedicated app that collects session data, chronicling top and average speeds, range, location, hours, and other helpful information.

Fliteboard has four board models – Fliteboard, PRO, ULTRA, and AIR. All have a price tag of $17,795.

The AIR is ranked as the brand’s most buoyant, stable, and durable product. Conclusively, it is the most straightforward package to “find freedom” on. The table below gives you the best way to look at the Fliteboard efoil models via size and volume.

This model is the brand’s standard offering. Constructed in a PVC carbon sandwich with an innegra deck finish, it is equipped with the 40 Ah/2.1KWh Explore battery, also known as “Flitecell.” Its average runtime is between 60 to 90 minutes. 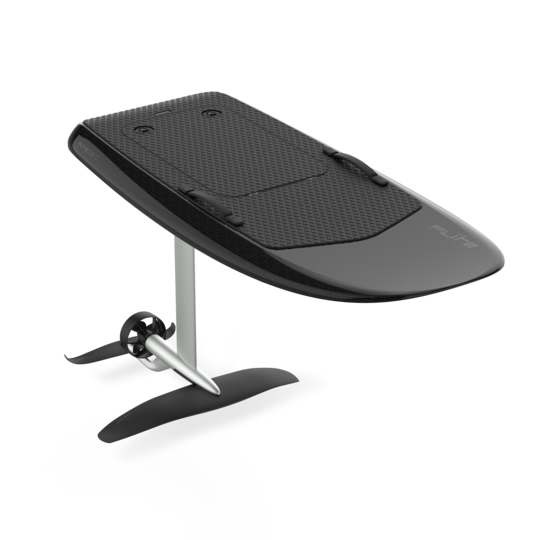 Its slick finish (black, flite green, silver, ash, and white) matches nicely with the deck’s underpad, which houses the board’s heart – the battery compartment and the Fliteboard’s brain.

Fliteboard’s large Explore battery takes 3.5 hours to charge under normal conditions fully. The operation of putting the battery into its molded home and connecting power cables can be done in under 20 seconds, either on dry land or in the waters.

It comes with a standard carbon wing, a thin foil, mid-aspect shape, and down curved wingtips that give a maximum speed in the low 20mph. This unit weighs 74 lbs, making it a little challenging to carry down the beach even with its conveniently integrated handles.

Fliteboard PRO is the range-topping performance option. It houses the Sport Flitecell – a slightly smaller and lighter 30Ah/1.65KWh option that averages a 45 to 60 minutes runtime. A full cycle charge will take about 2 hours to complete. 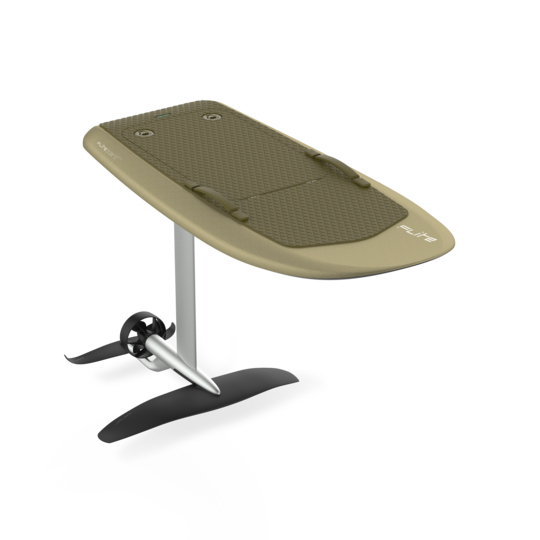 This model comes with a thin and small Flyer wing with a high aspect design that allows top speeds of 20 to 25mph. Like the standard model Fliteboard, PRO is also equipped with the same stabilizer setup.

Motor vibration is remarkably dampened compared to other efoils in the market. Clearly, its design and materials are at play. The flight characteristics are characterized by a rather severe angle of attack that increases as the board’s length decreases.

Overall, the Fliteboard PRO is stable and solid. It can be a challenge, and you might feel somewhat like getting up on a small tow board. But, once flying, no flex can be detected. The pitch and roll sensitiveness is the Fliteboard PRO’s dramatic difference from the standard model.

Described as an adrenaline machine, the Fliteboard ULTRA features a reduced swing weight that allows you to push your rides to the limits. You can connect optional foot straps for this Fliteboard efoil. These foot straps make you connect to the ocean like never before. Some testers even landed backflips with it. 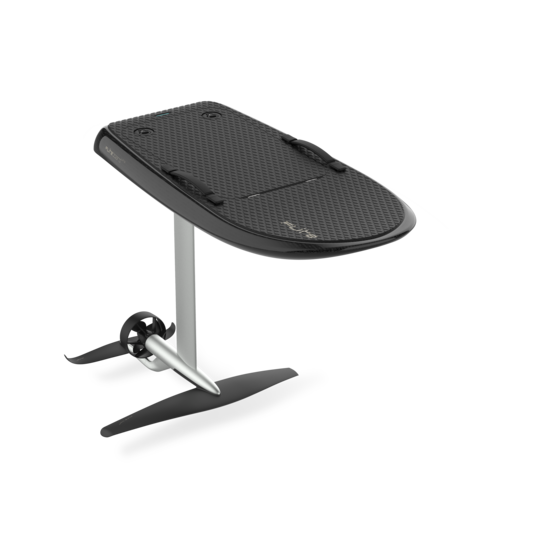 The Fliteboard ULTRA is ideal for expert riders who want the least possible size and swing weight. At 4’2”, it is the most responsive Fliteboard efoil. Its receptiveness is the result of its reduced weight, streamlined design, and optional accessories.

It can be quite a challenge to stand up on the board and start running. But, once you find your stable position, your adventure begins. Those who have experienced riding the Fliteboard ULTRA described it as having so little weight under your feet.

While the Fliteboard PRO and Fliteboard ULTRA give the same fun and indescribable riding experience, the advantage is more significant with the latter. The Fliteboard ULTRA offers you a more relaxed ride. Also, it responds to the slightest movement of your body – which adds to the overall fun.

The Fliteboard AIR has the largest board and the only inflatable board on Fliteboard efoils lineup. It presents more volume, which makes it more trouble-free to stand on. However, keep in mind that it has more resistance on the water than the carbon fiber models because of its size. 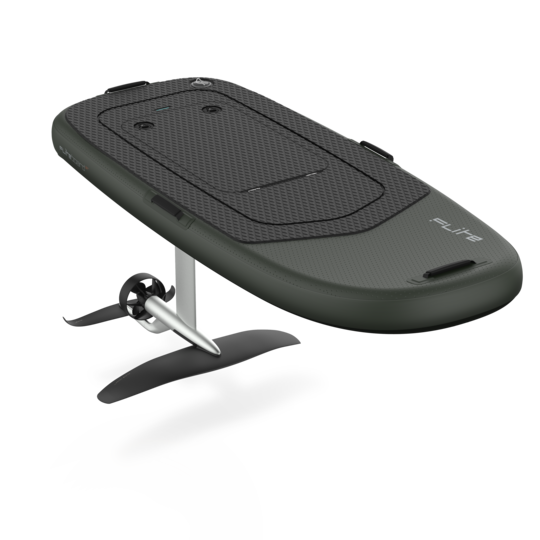 This high-quality inflatable board is perfect for beginners, Fliteschools, yachts, and commercial operators. Despite being the only inflatable board on the Fliteboard series, it is 50% more buoyant than the standard boards. This buoyancy lets you learn a lot easier. Not to mention, inflatables are effortless to pack down for easy transportation.

This Fliteboard efoil is the most user-friendly option. The rider won’t fall too high since it’s lower than the first three models. Also, the rider will be less likely to fall on the wings. The Fliteboard AIR is perfect for kids and heavier riders in ordinary to shallow water conditions.

Overall, Fliteboard is a union of innovation, design, technology, and valuable elements that unlock a foreign fun that most have never been able to enjoy until now. Once you ride it, you will completely dispel what many trolls pin it down to be – CGI. Fliteboard efoils truly lets you ride freedom.

A: Fliteboard efoils use charged battery power or renewable energy. Also, Fliteboard efoils are designed to be efficient and lightweight to potentially make the most environmentally friendly powered watercraft in terms of speed and range.