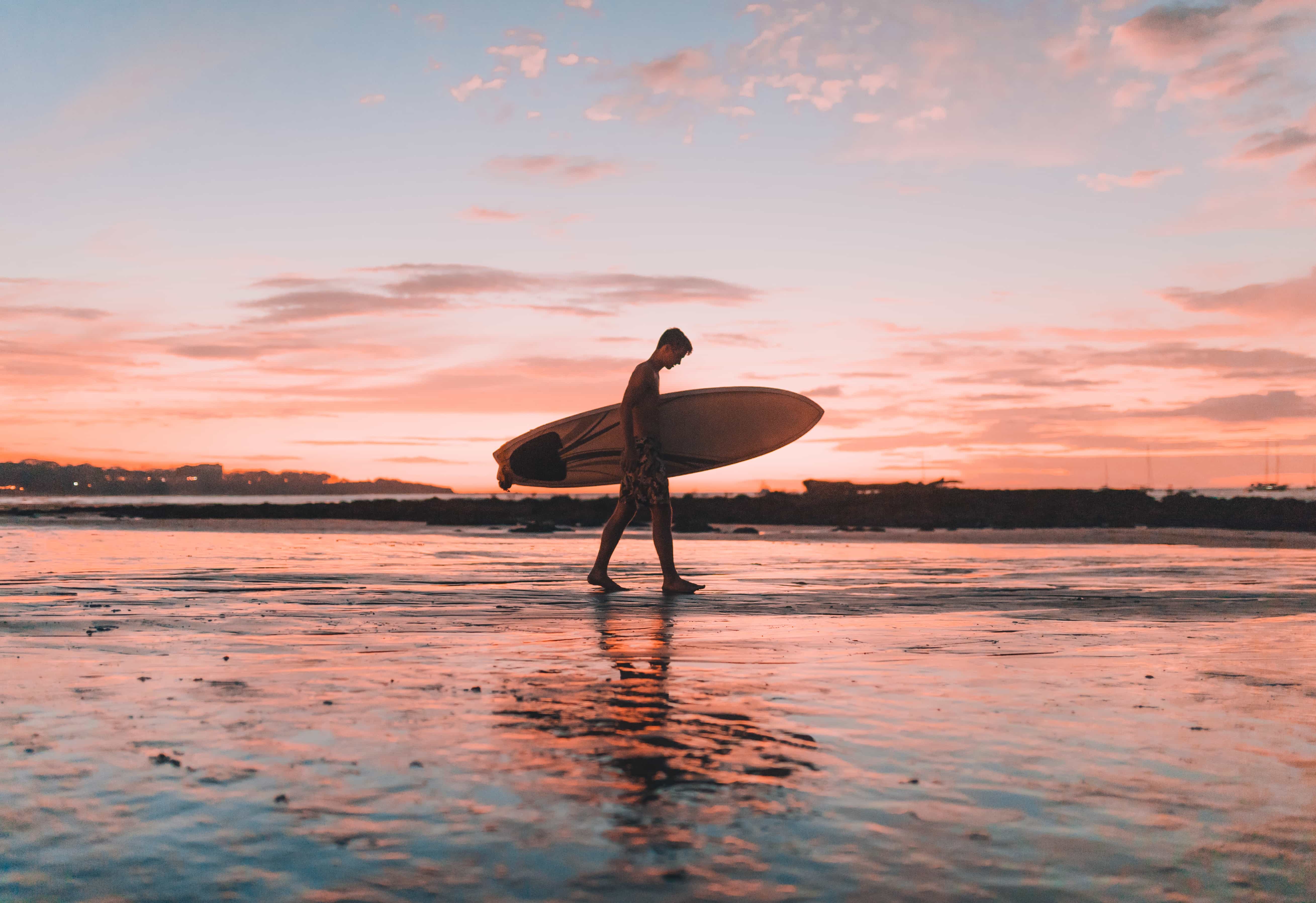 Picture this: You’re at this surf town you’ve been wanting to visit for years. You’ve waxed your board, you’ve put on your wetsuit, and now that it’s time to go surfing, you see that all the water’s gone and it’s a hundred meters away from where you’re standing. What the heck!? Some surfers may find light in this low tide situation, while others may not. You may be asking yourself, is it worth it to walk through all that exposed beach? And if you do, will you still be able to find beach breaks and swells at the other end?

Fret not, my friend. In this article, I’ll tell you all about the factors you need to know about the best times for surfing, and whether you should surf during a high or a low tide.

What is a high tide and a low tide?

First, let’s talk about what these tides are and how they occur. The rise and fall of the oceanic tides, also known as the high tide and low tide, happen because of the sun and moon’s gravitational pull towards the Earth. These occurrences consist of two cycles that are divided into 12 hours each.

You may have noticed that during the full or a new moon, the tide’s high and the waves are bigger. This happens when the moon is closest to our planet, and the influence of its gravity pulls at the earth; therefore creating swelling or a bump where the water naturally drags in. This results in the ‘high-tide effect’.

Meanwhile, on the other side of the planet, they experience what we call the low tide, or the event wherein the water moves away from the shore.

Factors that Affect the Waves

Before we dig deeper, let me briefly discuss the other factors that we need to consider in determining which tide you should surf on. Aside from the gravitational pull, other factors affect the tide and waves such as the tidal push, the undertow currents, and the kinds of wind.

The onshore wind is the type wherein the wind from the sea blows in towards the shore, while the offshore wind is the one that blows from the land to the sea. There’s also the cross-shore winds that create choppy waters. Throughout the day, these different winds fluctuate and affect the condition of the waves. 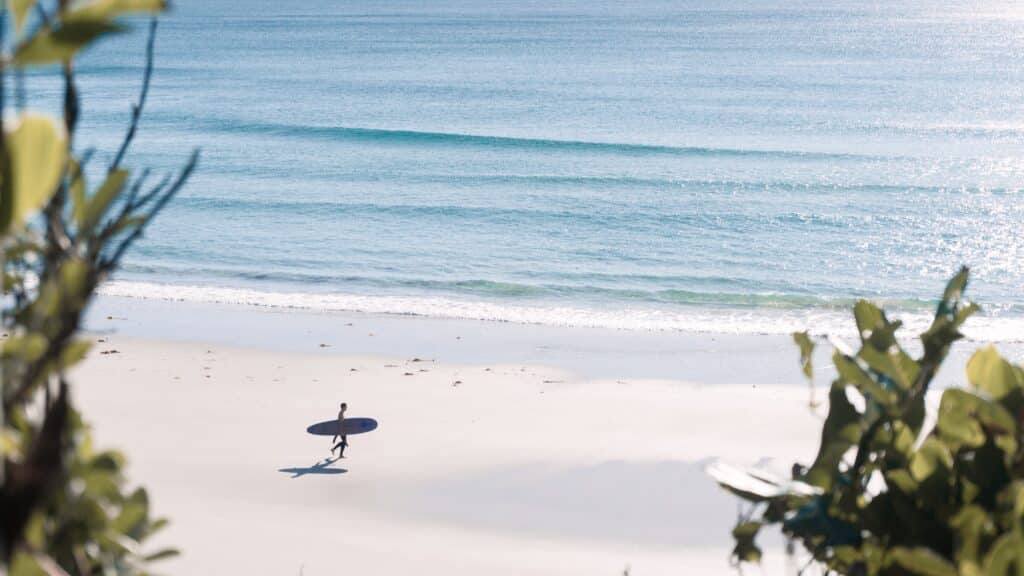 During low tide when the sea is at its farthest, the water surface is shallow, so the rocks, sandbars, and barnacles of the sea are exposed. This means that the sea is below the tidal range, causing small breaks and weaker waves.

Believe it or not, some people prefer to surf in lower tides when the take-off spot and the water over the reef are not at their maximum depth. Beginners also find low tide a more enjoyable condition to practice in, because when it’s low tide in some locations, the surf breaks with higher waves, and that creates deeper and more pronounced barrels.

Again, this varies in the place where you’ll be surfing. Some beaches have the biggest waves an hour after low tide, while others have zero waves as soon as the water moves far back from the shore.

Now, we also have the extreme low tide, wherein the waves fall flat and the reef is at its shallowest. There will be no good breaks at this time, and in this condition, surfing isn’t recommended as it is risky and could be life-threatening. 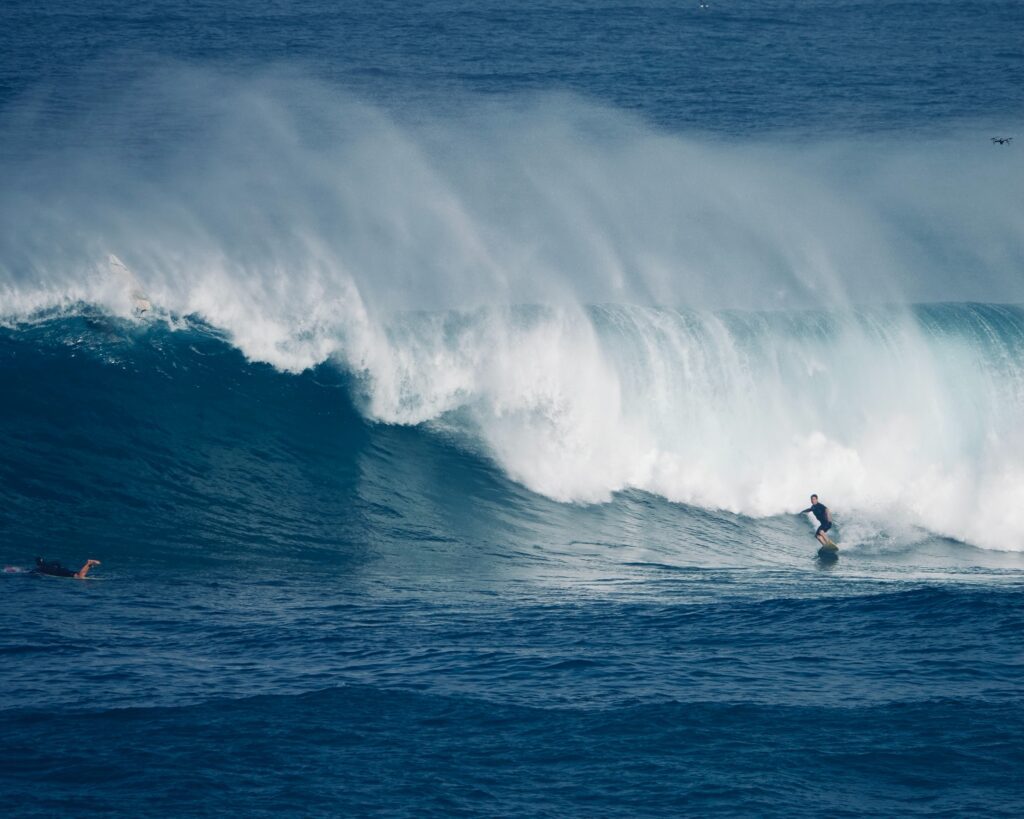 If you’re an entry-level surfer, you might want to skip surfing during high tide. High tide is when the water is at the top of the tidal range, and because it continuously rises, the waves will push higher, creating fat waves that could become mushy and choppy later on when the tide reaches its peak. In this condition, you can expect lesser crowds, as the waves are harder to ride on and are potentially dangerous.

But as intimidating as it may seem, hardcore surfers find extreme high tide a more preferable time to surf, because they see shore break waves as more fun, perhaps maybe even more than reef breaks.

In simple terms, shore breaks are unpredictable waves that break directly into a steep shore. Examples of these are Waimea in North Shore, Oahu, and Teahupoo in Tahiti. These powerful waves are known to break boards and cause injuries to many surfers; however, they still attract hundreds of heavyshore pounders every year.

How to Check the Tides for Surfing

The locals know best about their waves; however, if for some reason you’re unable to ask them for the best time for surfing in their area, there are other ways you can know about this.

You can look at the local surf reports, check with your smartphone tide app (My Tide Times, Tide Charts, Tides Near Me, Tide Alert, etc.), or get your own tide-monitoring watch where you can view the tide updates in real-time.

The Best Times for Surfing

Now that we’ve discussed the wave conditions of the low tide and the high tide, I will now tell you about the three best times of the day for surfing. Mainly, it’s in the morning before sunrise, during mid-tide, and before the sun sets. I find these to have the least crowd and the most consistent waves; therefore I get the most out of my surfing sessions.

A little bit of disclaimer, though, as these will also depend on your location’s wave conditions and weather. For your reference and safety, please go ahead and ask the locals or other surfers for more information.

Have you heard of the popular surfing term ‘dawn patrol’? It’s when a group of surfers go out to surf at dawn, just before the sunrise so they have the first dibs on the waves before the other surfers wake up.

Aside from the lesser crowd, another reason why most people like to surf early in the morning is because of the light wind and calm waters that generate smaller, less powerful, but consistent waves. Another reason why the rising morning tides are also safer for beginner riders.

As a bonus, there are also health benefits you get from the sun such as Vitamin D, a boost in serotonin, and weight loss for every 30 minutes that you surf early in the morning.

The prime wave condition is neither the low tide, nor the high tide — it’s the in-between, or most commonly known as slack tide or mid-tide. During this period, you’ll notice that the waves have an increased intensity and much more consistent breaks. The mid-tide starts an hour after the low tide and peaks an hour after the high tide, so you have two to three hours of good waves for your surfing session.

In some places, people find the waves easiest to surf on before the tide goes out and hits its lowest. The breaks are far from the shore and waves are gentler.

Surfing before sunset is quite a favorite of many surfers as well (unless you’re from the west coast and you have to directly stare at the sunset). The water’s warm compared to the ice-cold sea in the morning, and there are fewer kooks out in the sea, too.

Similar to ‘dawn patrol’, sunset sessions also have a lesser crowd, as people start to pack to go home during this time. There’s also a lighter wind before evenings. Once the onshore wind kicks in, they push the waves towards the shore and break them before they get high. But then it falls off and the power of each wave slowly decreases after an hour or so.

That said, the downside of sunset sessions is that swells as such will completely die out sooner than you think. This leaves you with a smaller time frame between taking off and calling it a day.

The Worst Times for Surfing

For your safety, avoid surfing during these specific times of the day.

Predators such as sharks are known to hunt for their food before the break of day and as soon as the sun goes out. This is because their prey can’t see them from under the water, while they can see their prey’s silhouette from their point of view. Aside from shark attacks, surfing during dark hours is also dangerous because you may not be able to see the incoming waves and beach marks.

As the offshore winds blow hard out the land during late mornings and in the afternoon, you may find it hard to balance in your board because of the strong waves. Not only that, but you may also get drifted away to the sea by the strong offshore winds. Now, if that doesn’t scare you, maybe the sprays of a wave’s feathering edge that can blind you and cause nasty wipeouts will.

Take it from me, it can be hard to know when’s the best time to surf, especially when you’re in a new place. For this reason, I’ll be giving you some safety tips whether you choose to surf at high or low tide.

Knowing which tide to surf on can be tricky, as the wave conditions depend on certain things like tide fluctuations, wind and weather patterns, and lastly — the nature of the beach itself. For these reasons, it’s still best to ask and observe the ways of the local surfers.

Generally, the safest and most ideal time to surf is during mid-time or slack tide, which is the hour before and after the transition of high and low tide. During this period, the swells are consistent and the breaks are even because of the light winds.

High tide happens due to the moon’s gravitational pull towards the planet, resulting in big waves that can be dangerous once they’ve reached their peak. During this period, entry-level surfers are not recommended to surf.

Q: Is it safe to surf during low tide?

Some surfers prefer to surf during low tide because this is when the waves are most consistent in most surfing locations; however, for others, this means shallow reefs that could be dangerous if the tide hits extreme level.