Surfing allows you to be in a deep relationship with the ocean and the land that meets up with the sea. This relationship makes you understand that no two waves are alike and how the same goes for how every wave is produced. Looking from a distance, it might seem like the waves all behave and are formed the same. But, looking a little closer and going in and under the surface, you will understand how waves come to be a few different ways.

Surf breaks are permanent obstruction that causes waves to break. This obstruction forms barreling waves or other waves that can be surfed before it sooner or later collapses. This article introduces you to the different types of surf breaks and what makes each one unique.

There are about a dozen different types of surf breaks. Some are permanent, and some are semi-permanent. But, in surfing, three main types produce the style of wave that riders can surf on. These three surf breaks are what we’ll break down in this guide.

A beach break comes to pass where waves break on a usually sandy bed. One of the perfect examples of a beach break is the classic Hossegor Beach in southern France. This spot is famous for waves of up to 20ft.

This surf spot where waves break over sand is the most common lineup for surfers. It delivers mellow waves for beginners to learn to surf while offering powerful waves and pounding shore breaks for advanced riders.

A beach break’s peak continuously moves from one week to another as the sandbars shift around the ocean floor. This movement happens from one side to another, causing an effect on the currents, swells, and tides.

This shifting causes the constant change of waves. One day you could be surfing perfect peeling lefts, and the next day be surfing close-out waves in the exact same spot. Today, the surf break could be in one place, and in two days, it could be a hundred yards down the shoreline.

Paddling out on a beach break is usually more challenging as there isn’t always a clearly defined channel through which waves are not breaking. This is the same when trying to figure out where to sit in the lineup.

On the other hand, this type of surf break is safer than others because the sand bottom sits relatively a minor threat, and rip currents are less predictable and often more substantial. These are often considered softer options than their rock-bottomed counterparts.

It can be rare to find a beach break that offers very long rides. This is why they are often characterized as average waves and closeouts when in reality, they can be excellent for both beginners and advanced riders.

The place where waves hit a point of land or rocks jutting out from the coastline is the point break. This type of surf break was named after the Swayze/Reeves film entitled “Point Break.” One of the most famous examples of point breaks is Bells Beach in Australia.

What makes it a point break? A point break is a phenomenon. It is when lines of swell hit a stretch of land at a sloping or even oblique angle. This breaks along and around the ground instead of directly towards it. This makes them more likely to form alongside a headland, then break over sand or rock.

The good thing about it is that its resultant waves generally peel for far longer than the other types of surf breaks like a beach break. The long and racy rides it offers are best for advanced riders but aren’t advisable for first-timers and beginners.

Paddling out at a point break is pretty easy as you can always move around the breaking wave. Also, point breaks usually have only one take-off point and travel in one direction. This means that you may have to get in line and wait your turn to catch a wave.

Quality over quantity is what point breaks are all about since the length of the waves makes it worth all the paddling. So much that intermediate and advanced surfers prefer point breaks as they can be great places for riders to perfect tricks and improve style.

This type of surf break is also a test of a surfer’s ability to “read” a wave’s pace, including how to link numerous turns together with the proper flow and precision. Pro surfers Fanning and Parkinson reared on the long right-handers of Australia’s Gold Coast, making them point break virtuosos.

There aren’t a lot of high-quality point breaks in the UK and Ireland regions. But, there are certainly a few ones worth traveling to outside of their territories.

The Cloudbreak in Fiji and Jaws in Maui are the perfect examples of reef breaks. As the name suggests, this type of surf break happens when a wave breaks over a coral reef or a rocky seabed. It may occur close to the shore or well offshore from the shoreline.

The reef break is often seen as the most demanding break since they are incredibly shallow and may cause unpredictable consequences. Moreover, they are common in tropical surf destinations and often deliver reef passes or deep channels for safe paddling out.

This type of surf break usually pumps perfect barreling waves that break in the same spot. Unlike beach break, reef break is not in the cards of changing a lot. This results in the type of wave that is almost always the same way every time. Swell direction and tide are generally the main factors that change how waves break over a reef.

Reef breaks create the best hollow barrels. However, these barrels can also be the most dangerous ones to ride. Think about the Pipeline, Teahupoo, and Cloudbreak – they are the most spectacular reef breaks but the riskiest ones to ride.

This is why most prestigious surfing competitions are done in this type of surf break – because of the skill required to navigate them. Another reason pro surfers love riding reef breaks is the chance to watch the corals while sitting and waiting for waves.

Surfing a reef break, as hinted above, requires a higher skill level in surfing – intermediate to advanced. You should at least be able to take off safely and maneuver along with the wave in one piece. Wave reading is an advantage too. This signals you when to kick-off and how to react to dangerous zones.

Lastly, consider wearing booties when riding this type of surf break. Coral reefs can be very sharp. Some of them may even contain a highly toxic substance.

Different sea bottoms and local topography create other waves far from the main types of surf breaks. While they offer an ample amount of swell for riders to surf on, they aren’t trendy for professional riding.

This type of surf break usually forms from sand and builds up over submerged or partly submerged shipwrecks. They can be temporary or more or less permanent, depending on how long the wreck has remained in place.

Shipwreck breaks are beautiful spots and can hold some decent sizes of waves. The best time to surf here is during high tide.

This break is a wave that breaks directly on or very near the shore. It happens when the beach is very steep and at the shoreline. They closely resemble beach or reef break; only they break very close to the shore.

A rivermouth break happens at or near the entrance of a river or a creek. It can break as either a left or a right wave, sometimes even a peak which can break both ways. Usually, its bottom is sandy. But, it can also be pebbles, rocks, or even coral reefs.

What Are Lefts, Rights, and Peaks? 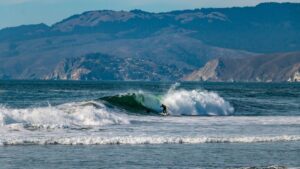 Now that we’ve touched on the type of surf breaks, a little more profound understanding of the waves needs us to know what left, right, and peaks are.

A wave is either a left or a right. It generally depends on which direction the wave breaks from the surfer’s point of view, paddling and riding the wave. If a surfer is paddling to snag the wave and breaking from right to left, he is supposed to have to turn left to get on the swell because it is a left.

From the onlooker’s perspective, the wave will be seen breaking to the right. But, it is the surfer’s point of view that counts. So, a right is evidently, the opposite of a left.

The wave that breaks, forming a rideable wave both left and right, is a peak. In a peak, two surfers can surf it at the same time in different directions.

Many riders assume that waves are the same everywhere you go. They don’t. Waves, just like surfing, isn’t as simple as it looks. There is more to it than waves coming out of the water. The style and characteristics of every wave depend on the type of surf break that produces it.

Q: Why do waves break?

A:  When water flows in, its upper layers travel faster than its lower layers. Imagine waves arriving at the beach. As they travel from the open ocean, they move up a gradual sandy incline and start to slow down. Its bottom slows more quickly than the top. So, rather than moving forward as one, we get a whole series of water layers sliding past one another.