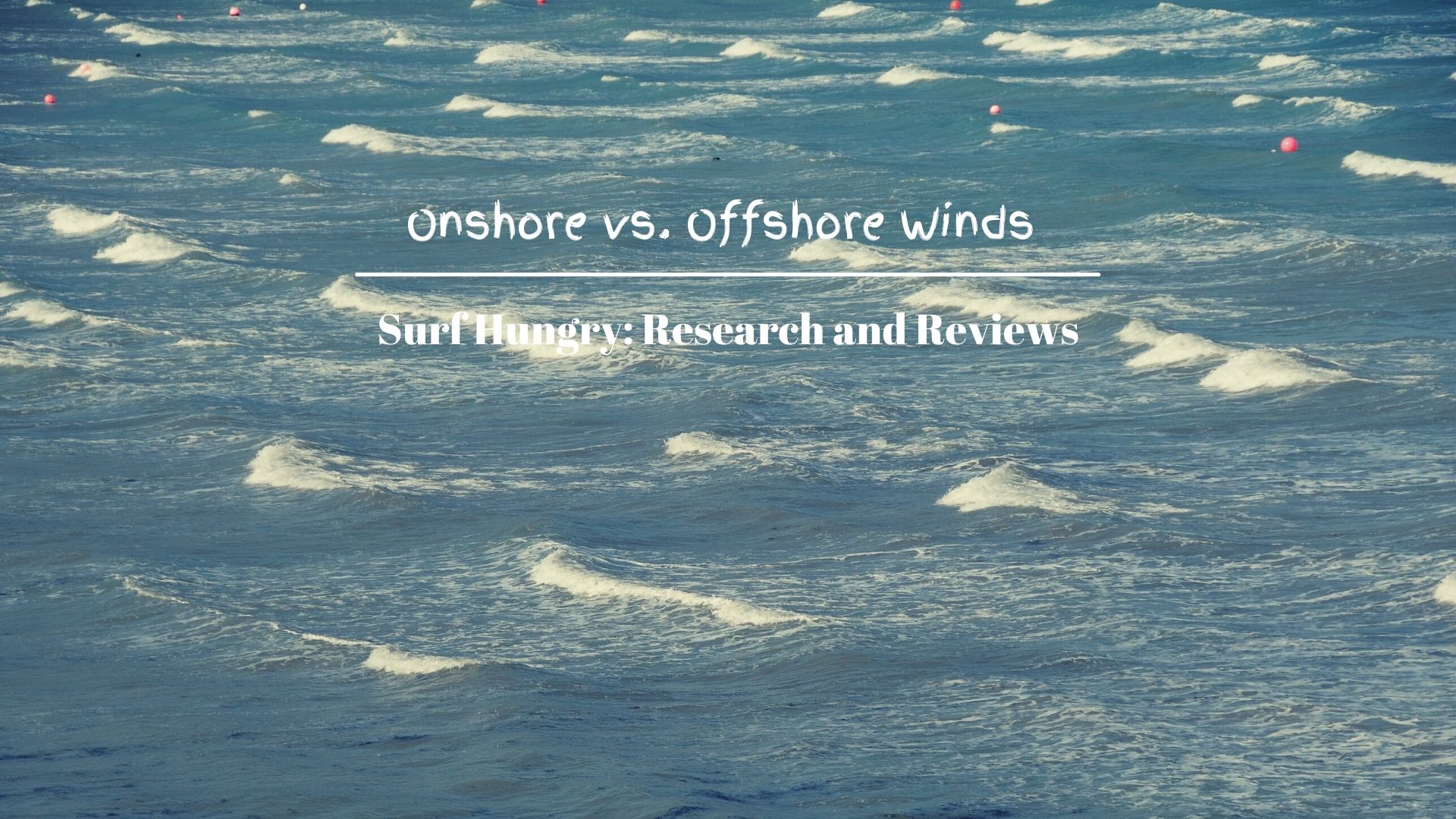 The direction of the wind has a significant impact on the formation of breaking waves. This means that each surf break is unique and has different swell and wind directions that work better than others. However, the basic principles of local wind direction apply to every place you go.

This article examines the significance of wind in creating good waves for surfers and the differences between onshore vs. offshore winds and what generates them. 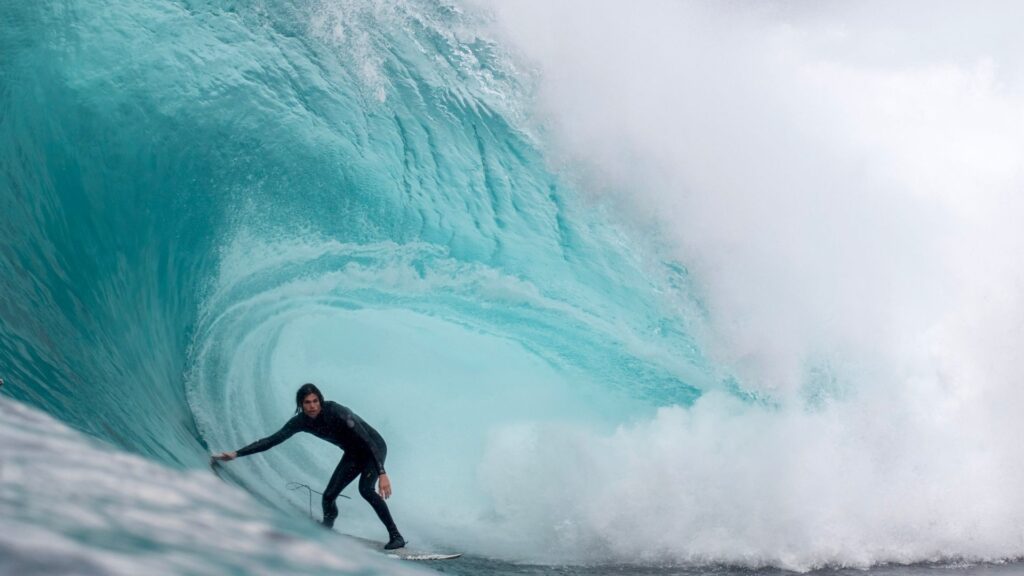 Winds flowing from land to ocean are known as offshore winds. Surfers seek these winds when deciding when and where to go surfing. The wind blows against the wave’s top, resulting in cleaner conditions and a better likelihood for the wave to form a barrel.

How Does Wind Affect Waves?

The wind plays an essential function that most surfers are probably unaware of. Of course, windy conditions might ruin an otherwise fantastic surf session, but without the wind, there would be no waves.

Wind, in fact, is what causes waves in the first place. This can happen in far-flung regions across the ocean, where strong storms and winds generate ground swells that travel enormous distances and arrive as long-period waves on the coast.

This can also happen in more localized gusts, resulting in wind surges that turn into waves on our beaches.

Whatever the source of the swell, when it reaches the coast, the local wind conditions play an essential part in determining whether the waves are good for surfing or not. Surfers are mainly concerned with the local winds, specifically onshore vs offshore winds, when analyzing the surf forecast.

When it comes down to it, even little variations in wind speed and direction at any given surf break will significantly impact the wave quality. 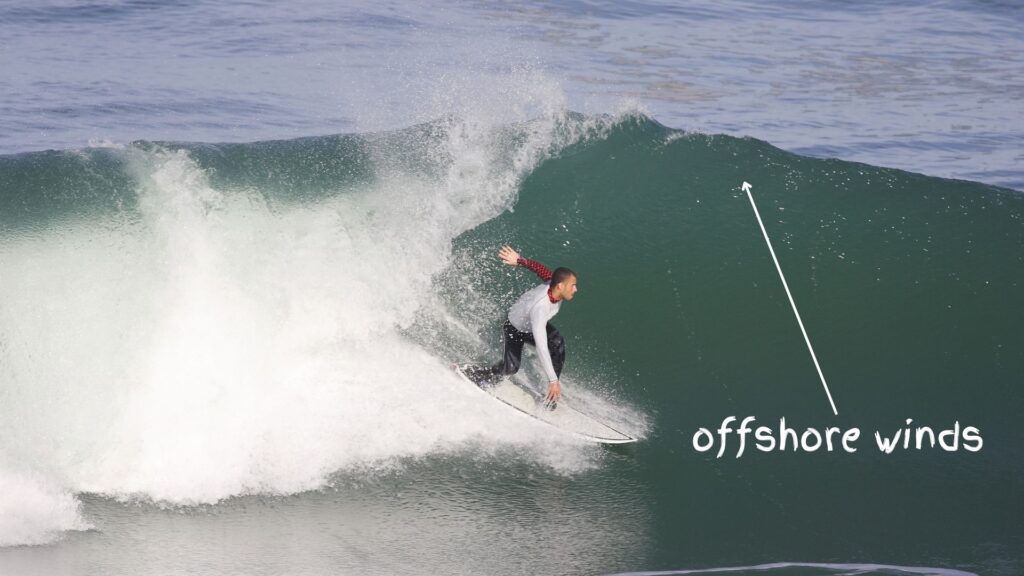 When we talk about favorable local wind conditions for surfing, we usually refer to mild offshore winds, defined as winds flowing directly out to sea from the land. A little offshore wind produces ideal “glassy” and smooth wave conditions, which any seasoned surfer craves.

Offshore winds also delay the actual breaking of the wave, resulting in waves that only break at a critical point. In return, it provides longer-held and steeply shaped wave faces, making it faster and a better canvas to surf on and eventually breaking more fluidly.

These winds, like everything else, are only good up to a point. Strong offshore conditions can cause waves to close out or not break at all, depending on how long they take to break (in the case of smaller waves).

Furthermore, because they serve as a force against you and your surfboard, they can make it more difficult for a surfer to really get onto and catch a wave, as well as provide a constant stream of water spray in the eyes. 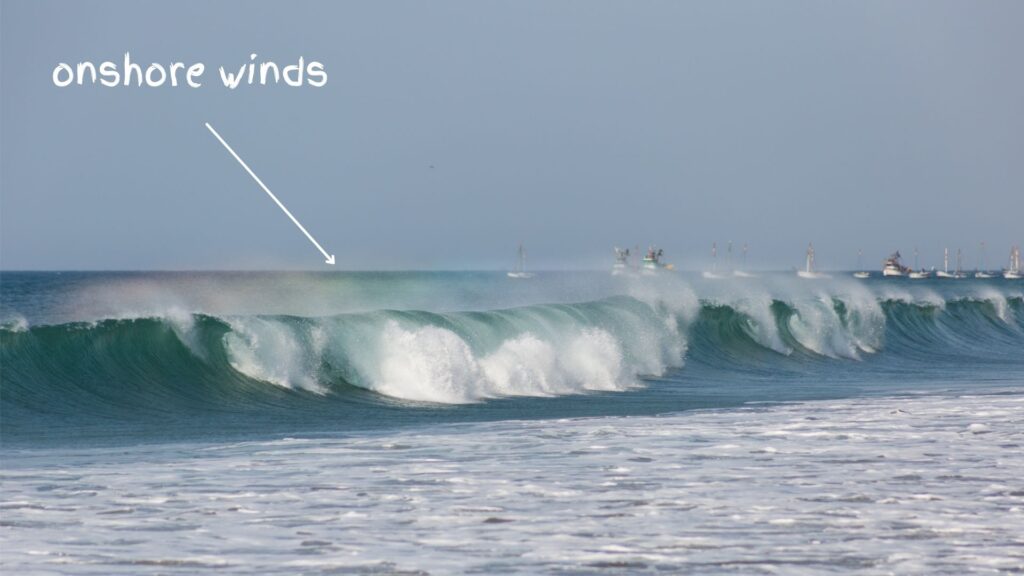 Onshore winds, in contrast to offshore winds, are often associated with less-than-ideal surfing conditions. They are broadly characterized as ocean breezes directed from the sea to the land, but they can also be thought of as winds from any direction that is not offshore.

Onshore waves conjure up thoughts of choppy, sloppy waves that are difficult to surf suitably and uninviting to surfers.

Onshore winds cause waves to break early and in deeper water, making them less steep, less favorable to generating down-the-line speed for a surfboard, and more challenging to ride. It can also cause waves to shatter and reform rather than maintain a surfable wall between sections of the wave.

Onshore winds have the ability to create additional short-period “wind waves” that mix in with the better-quality long-period groundswell waves, resulting in unorganized and muddy surf conditions.

If there’s a benefit to onshore winds, it’s that they can create waves where there would otherwise be none (due to a lack of other swell sources) and that, in today’s increasingly crowded surf areas, less-than-ideal surf conditions can lead to fewer crowds.

What Causes Onshore and Offshore Winds?

Local winds along the shore are mainly caused by pressure variations within the atmosphere, which cause air to shift from higher to lower pressure locations. As a result, winds of differing velocities are created, resulting in what we know as an onshore oceanic breeze and offshore land breeze.

This consistent local onshore and offshore wind system is observed in warm areas. It’s most

noticeable on the western side of continents, where there’s a large landmass with little vegetation or a coastal desert, and where the ocean’s coastal upwelling causes cold surface currents close to the coast.

The transition between land and sea is a reasonably regular and predictable pattern that you may take advantage of if you’re aware of and able to spot it. It’s because the water and the land are two separate bodies that absorb the sun’s heat differently and change the temperature at different rates.

During the day, the sun warms the land, causing its temperature to rise, causing the air above it to warm and rise as well (convection). This creates a vacuum that must be filled, so colder air from above the sea is drawn in horizontally to fill it (a process known as advection), resulting in the onshore sea breeze.

Overnight, the temperature of the land may fall below that of the sea (especially in coastal deserts with little vegetation to “trap” the heat), causing the opposite to occur. Warmer air over the ocean rises, causing air to flow in and replace it from the land, resulting in an offshore breeze that may last until after sunrise.

As the summer progresses, the water temperature will gradually rise compared to daily temperature changes on land, extending the duration of the offshore morning land wind.

Which Wind Is Better for Surfing? Onshore or Offshore?

Offshore wind is the best sort of wind for surfing. It brings in well-formed and crisp breaks. When you go surfing, you want something like this.

The waves breaking on the beach are well-formed and break cleanly thanks to the offshore winds. If you want great waves, you’ll need offshore wind. Offshore breezes also minimize surface chop, resulting in better wave faces and allowing the waves to strip before breaking.

However, strong offshore wind is not suitable for surfers; anything above 25 mph is considered strong offshore wind. The reason for this is that it will be more challenging to paddle into the waves, and the wind will try to push you back, requiring you to keep the nose of the surfboard closer to the sea.

How To Tell If The Wind Is Offshore?

When you look at the waves at the beach and see the white spray shooting up and over the back of the waves out to sea as the wave breaks, you can see offshore winds plainly. This includes slight drizzles and fountains that add a lovely look to the waves.

Most classic photographs of waves depict waves with offshore winds, so look at those and note whether the waves are offshore when you next go to the beach. 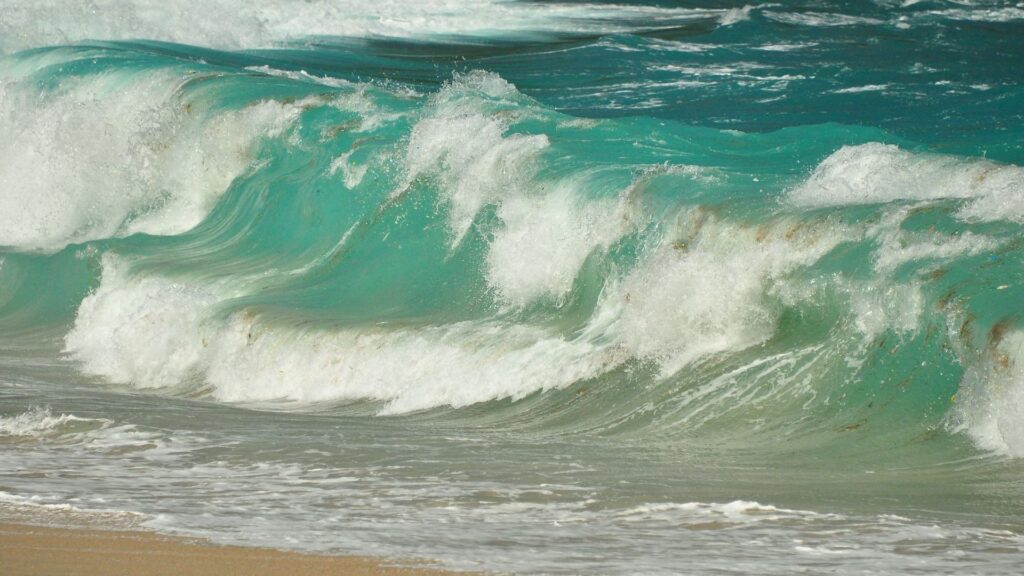 In A Surf Forecast

Remember that the wind can vary, so even if the prediction says it’ll be offshore when you get to the beach, it could not be.

Can You Still Surf Onshore Winds?

Don’t be turned off by the aesthetics of onshore days; most sports are still exciting to surf in onshore wind. Onshore waves may not appear spectacular, but they are still a lot of fun to surf and ride, so it’s typically best just to get out there.

Onshore winds blow from the sea to the land/shore, flattening the waves and making them suitable for surfing. They are the most typical winds in most surf areas across the world, and they usually start about mid-morning and last until just before dusk.

This is why most surfers consider the morning to be the ideal time of day for surfing, along with a few other criteria.

Overall, onshore winds aren’t all bad news for surfers; they can benefit those attempting to practice airs because they allow the board to stick to the rider’s feet rather than being blown away by an offshore wind.

Onshore waves are frequently associated with whitewater and unappealing aesthetics, yet there are still plenty of waves to surf and people in the water.

Glassy vs. Blown Out

The waves are mushy, choppy, and overflowing due to onshore winds. However, they seldom deliver good news. But, when all you have in front of you is a flat ocean, the onshore breeze can be beneficial.

This is because they create a lot of noise. It’s also preferable to ride two-foot rollers than to wait for a dream session on solid ground.

Offshore breezes are fun. They can soften the wave’s face, making it easier for surfers to draw lines and perform tricks. Moreover, offshore winds will also delay the breaking of the waves.

They will only break when they approach the coast in severe circumstances because the wind from the land is “holding” up the liquid barriers. Under light offshore breezes, surfers commonly use the adjectives “glassy,” “oily,” “clean,” and “silky smooth” to describe the quality of the waves and surf.

As a result, we frequently state that offshore winds clean the ocean and bring good waves.

On the other hand, strong offshore winds make it more difficult for surfers to paddle into waves and can cause water spray to fly into your eyes.

When it comes to wave quality, it’s evident that wind is just as crucial as the ocean itself, and as surfers, we’ll always be at the mercy of it.

We hope that this article has provided you with some insight into the differences between onshore and offshore winds for surfers and that it has aided you in your quest to comprehend the surf forecasts better.

Q: Is there such thing as sideshore winds?

Most Famous Surf Gangs in the World (2022 Update)

What Is a Thalassophile? | Signs You’re Connected to the Ocean