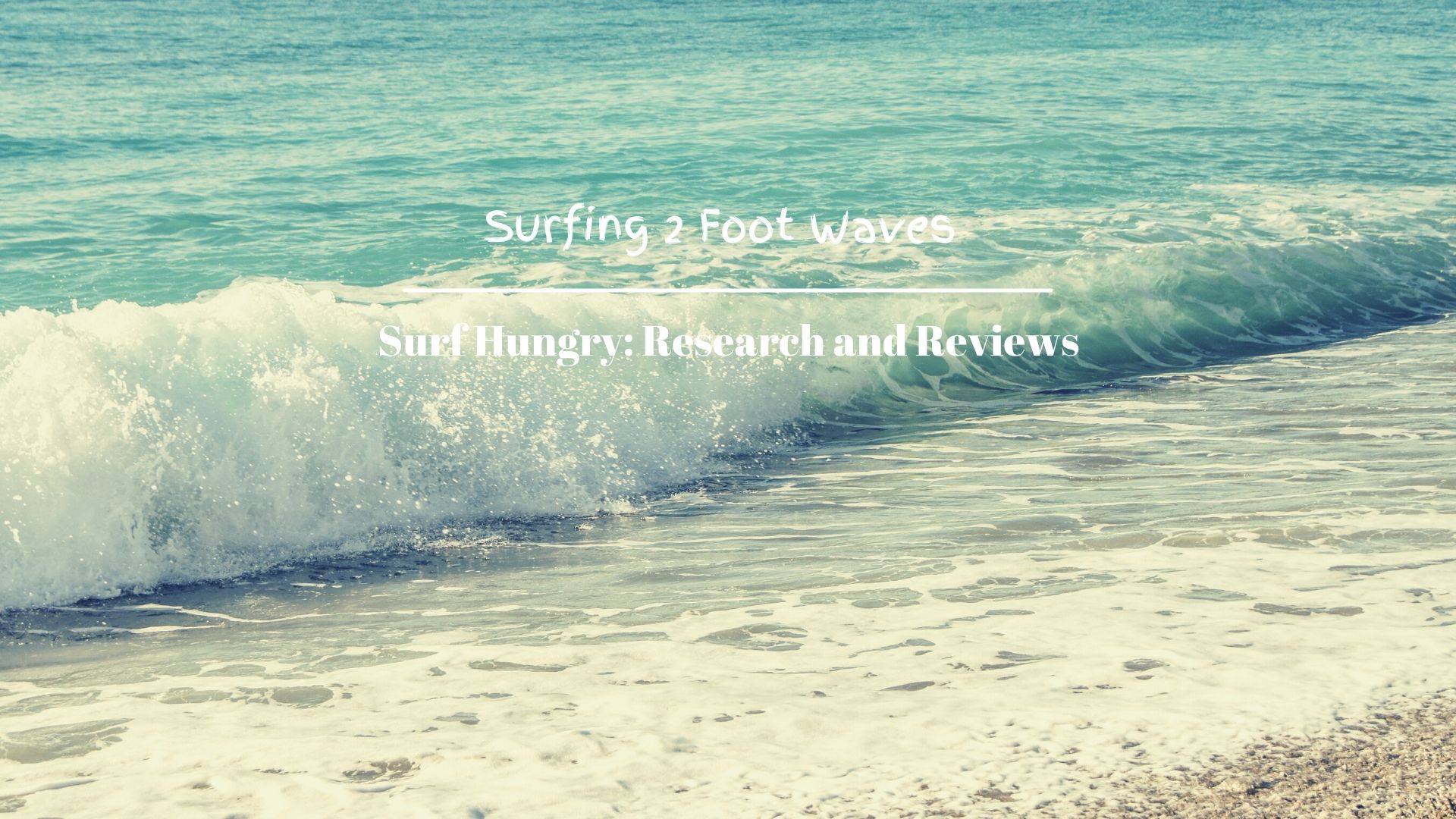 Surfers usually discard small waves. We often say, “If it’s small, it’s not worth it.” However, there are several lessons to be gained from the tiniest ripples. But what constitutes a good wave, and how big do waves have to be for you to surf it? Are you able to surf two-foot waves? Even if you prefer bigger waves to smaller waves, you can definitely ride 2 foot waves. Even while 2 foot waves may appear insignificant, they are totally surfable.

The truth is, due to the way surfers estimate wave height, what’s considered a two-footer could actually be 3 or 4 feet. For example, it depends on whether the surfer is measuring the wave’s face or rear. This article explains surfing 2 foot waves and everything you need to know about knee-high waves.

Can You Surf 2 Foot Waves?

As hinted above, 2 foot waves are definitely rideable. Knee-high waves are ideal for beginners to learn on as well as professional surfers to practice on.

These waves have less force behind them, making them ideal for improving your paddling skills. While big waves do a lot of the work for you in terms of pulling you onto the wave, little waves need you to paddle much harder.

Larger waves require more energy to maintain, so you’ll have to pump harder down the wave. 2 foot waves need different boards than larger waves. Utilizing a larger board, such as a longboard or a foam board, will be more pleasurable.

Small surf is more common in most regions than huge surf; therefore, knowing how to ride it is essential. You might not get out much if you’re just waiting for massive swells. Learning to ride different sorts of waves is crucial because practice is a big part of becoming a great surfer.

Moreover, not all waves are made equal. Wind, swell, and where the waves break all play a role in generating surf.

There are a few options when it comes to determining the height of a wave – Body Measurements, the Hawaiian Scale, the Bascom Method, and the Surfable Wave Method.

Which approach you employ is determined by your location or preference. Because there are several methods for measuring wave height, you should be aware of how someone determines wave height when discussing the surf. 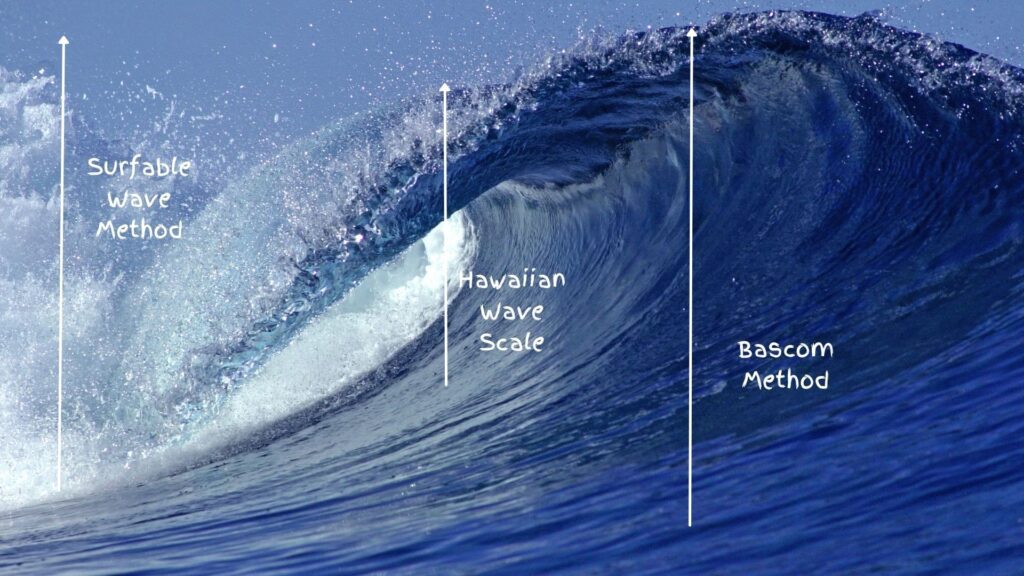 While not a formal method of measuring waves, it is a well-known and widely used method.

Waves are labeled as ankle-high, knee-high, etc., up to overhead and double overhead using the body height approach.

It’s not entirely true because all surfers are of various heights, but it’s based on a surfer who stands 6 feet tall. This is arguably the simplest way to describe wave height in an informal situation.

Below is the Surfline Surf Height Scale, which implies a surfer on a wave has slightly bent knees.

Local surfers in Hawaii utilize the rear of the wave to estimate wave height, which is referred to as the Hawaiian scale or the traditional scale. The history of the Hawaiian scale and the conversion process are both hotly argued topics.

From trough to crest, the translation from face to Hawaiian is around 1/2 to 2/3 of the original size. However, as the wave’s magnitude increases on the Hawaiian scale, the distance between its face height and its stated height widens.

In addition, this traditional wave measurement is not too popular outside Hawaii.

A US engineer, adventurer, and scientist saw waves differently from how the Hawaiians saw them. Willard Newell Bascom developed the Bascom Method – a widely regarded method that was simple, fair, and rational.

In his book “Waves and Beaches: The Dynamics of the Ocean Surface,” he claimed that waves could be measured by standing on the beach and aligning your eyes with the wave crest and horizon. The wave is determined from the crest point to the average sea level.

The distance between the trough and the crest of a wave is referred to as the “wave height” in the context of boating. Some surfers believe that the results are exaggerated and overestimated for some reason.

The Surfable Wave Method is a fair and balanced approach based on the area that the surfer actually rides. It’s called Wave Amplitude in nautical terms, and it refers to how far from the top of the water is the undisturbed water surface to the bottom of the sea.

This method strikes a balance between the Hawaiian Scale and the Bascom Method. According to the Surfable Wave Face concept, 2/3 of the Bascom Method is where surfers develop their lines and tricks from the bottom-turn and all the way up to the surface of the water.

Using the Surfable Wave Face approach, it is possible to achieve a wave measuring system for competition surfing that is both accurate while also balancing out the “underestimated” and “overestimated” methods.

How To Surf 2 Foot Waves

Riding small waves is not easy. But, it is from these 1 to 2 foot waves that we all learn how to surf. Mike Stewart, a nine-time World Champion bodyboarder, said;

“You learn more from surfing small waves than you do from riding big waves.”

While it isn’t so much fun to drive down to the beach only to be confronted with 2 foot waves, these waves actually help you develop and improve your surfing skills. Since they are more challenging to ride, you have to constantly modify your body to maintain your surfboard’s glide through the waters.

First things first – you will need a larger surfboard to succeed in 2 foot waves.

When entering a 2 foot wave, speed is crucial. It’s time to get out there and ride that wave. If you need a little extra oomph, paddle hard and kick your feet in the air. On a longboard, take off behind the peak as soon as possible to gain as much speed and momentum as possible before popping up.

Lift your arms to relieve the surfboard’s weight now that you’ve caught a 2 foot wave. Make sure to shift your weight slightly forward and observe the board speeding up right away. Staying on your toes when riding down the lines is key to success.

If you happen to come across an exceptionally forgiving portion, you can consider trying out a few tricks. Floaters, tail slides, and cutbacks can all be made in 2 foot waves, but aerial moves like 360s are highly unusual.

You don’t have to act like a pro in little waves, especially if you’re a beginner. Beachgoers won’t take you seriously if you show off your moves with flashy body movements and self-congratulation. You should be able to go forward and backward on the board without moving your body too much.

Remember to maintain a low stance and a large spacing between your feet as well, just in case. To lessen drag, glide through flat regions, and boost your speed, use these items.

There will be days when the surf isn’t up. Days when no matter where you reside or relocate, it is hard to find huge, juicy waves. These days, a surfer has options – sulk, couch surf, and obsessively check surf forecasts, or grab a longboard and try out 2 foot waves?

We all know that little waves are where we learn to surf. We rehearsed our pop-ups in these 2 foot waves until we were confident, and we thought out ways to produce speed with the bit of momentum we had.

Whether you haven’t moved on or haven’t ridden anything smaller than double overhead in years, here are some respect-restoring small-wave lessons.

When the waves are really pounding, your mind is in “survival mode,” making split-second decisions without understanding how minor tweaks could enhance things.

These can range from improving your stance (changing undesirable habits like hunching instead of bending at the waist) to improved foot placement for better control. This is also a fantastic area for speed to work on your pumping technique. Working those muscles in slower settings improves muscle memory on bigger waves. 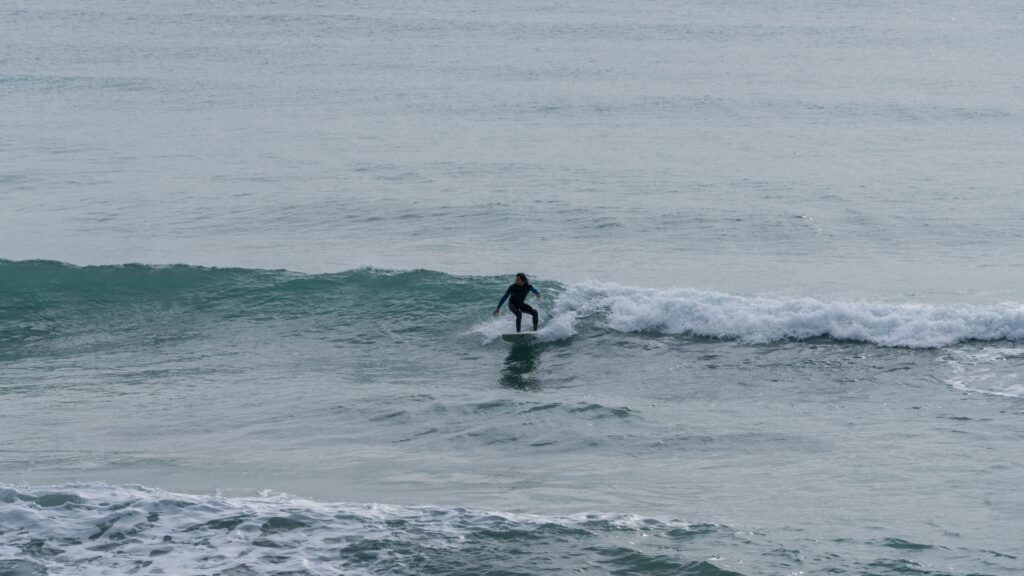 It pays to go back to the 2 foot waves to work out the wrinkles if you’re unsure how to pull off your first roundhouse cutback or if you’re already talented but having trouble with the smoothness of a particular trick.

There’s less pressure in the event of a wipeout or bail, and you’ll have more energy to experiment with other options until you find one that works.

All of your skills should be perfected on waves where you have the most space for error. You may take them to the big leagues once they’ve proven themselves here and watch them explode.

Similarly, practicing your first backside ride on smaller waves is recommended, and if you’re wondering about trying the opposite stance, there’s no better spot to figure out what you’ve got.

Misunderstanding and clashes of wills are unavoidable with all of the adrenaline and excitement that larger wave lineups provide.

When the swells are big, it might be challenging to stay focused on fairness with thirty surfers all jockeying for position.

Going out in smaller waves puts you in the water with beginners who are still learning the ropes, which is fantastic for reminding you of where you started and washing away any selfish tendencies or bad etiquette habits you may have developed.

How To Really Surf

The rush of endorphins you get from riding a large wave while surrounded by other surfers can rapidly become addictive.

If not kept in check, a surfer’s skills can suffer when his concentration in the water shifts from gaining competency and a solid set of skills to performing for a crowd and garnering applause.

2 foot waves remind you that there’s still a lot to learn, and even if your death-defying stunts don’t have everyone on the edge of their seats, the incremental learning along the route to becoming a versatile surfer is invaluable all the same.

If you have the perfect board under your chest and have the proper small wave tactics, surfing 2 foot waves can still be a lot of fun.

Aside from all things mentioned, remember that patience will be your best friend if you want to have a memorable small wave surf session.

There will be more extensive sets on those 2 foot wave days. You’ll be the one shredding every set wave if you’re patient enough. So please refrain from attempting to surf everything that comes your way.

Save your energy for when the waves are good. Paddling for every small wave that comes through will exhaust you, and if you’re too weary, catching and shredding the day’s wave will be more difficult.

Q: What size wave is suitable for beginners?

A: In general, the smaller, the better, but not so small that you can’t move around. This means typically 1.5 to 2 foot waves. (sometimes 3 feet if you’re brave).