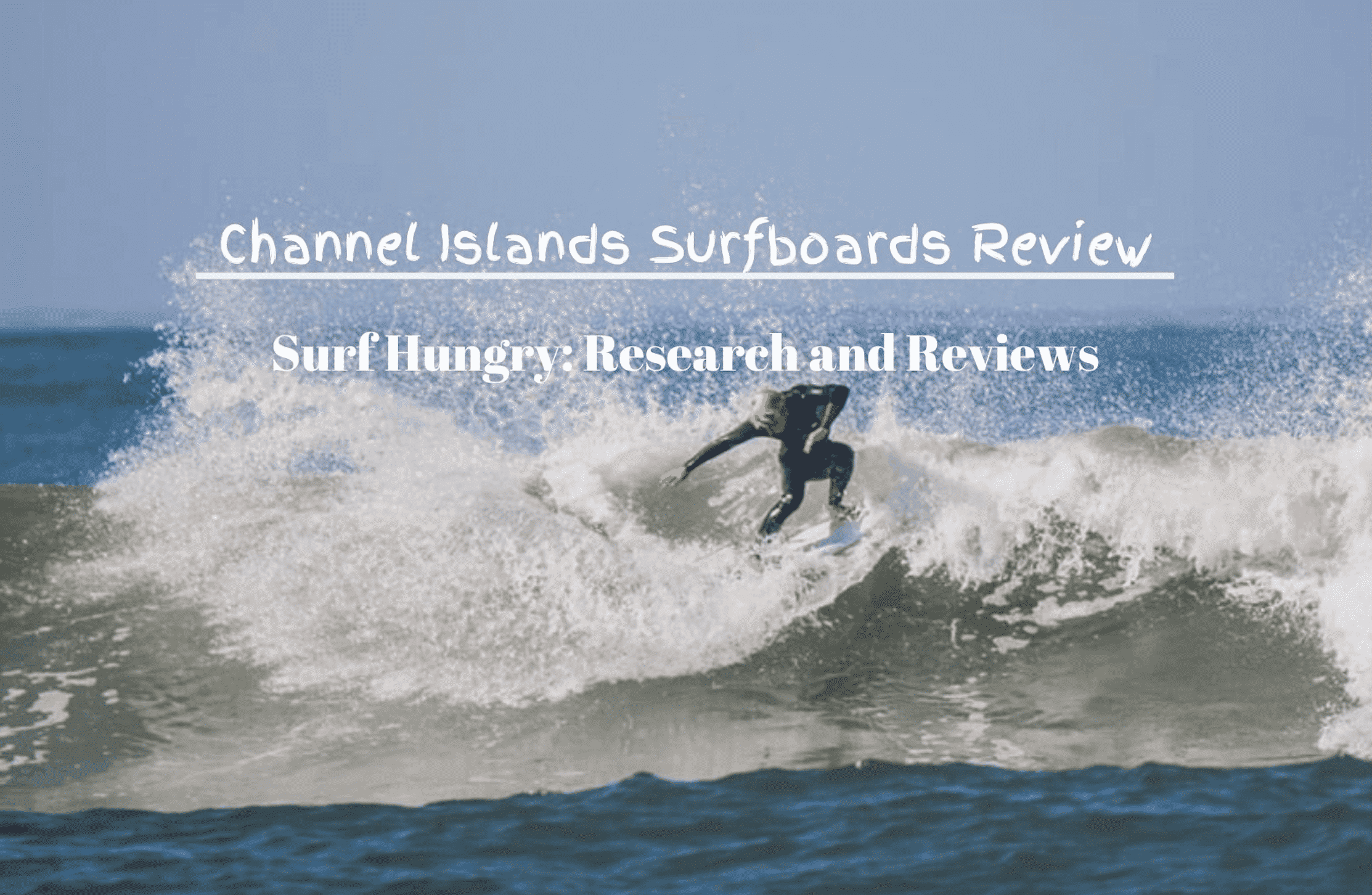 Kelly Slater, Dane Reynolds, Lakey Peterson, Jordy Smith, Alana Blanchard – the best surfers in the world who all have one thing in common. Under their feet when they ride the waves are surfboards designed and shaped by Channel Islands Surfboards. Channel Island Surfboards is one of the biggest surfboard brands in the world and has time and time equipped with the largest names in the surfing world. That tells a lot about the brand.

Whatever their secret is in having these big names loyal to them, we’ll find out in our Channel Islands Surfboards review.

Channel Islands Surfboards – Who Are They?

Al and Terry Merrick created Channel Islands Surfboards in 1969 intending to provide the most dedicated surfers with the most advanced and performance designed sticks. Their hard work, innovation, and originality have paved the ways for their name.

Channel Islands Surfboards grew from their humble, local grass-roots undertakings to a radical and innovative organization that caters to the best of the best surfers in the world. The two started the company with hard-core surfing combined with the quality they had in mind.

These ideals brought them the guidelines that gave us decades of relentless changes in the surfing industry. For over 50 years, Channel Islands Surfboards have been shaping surfboards that will work even with the changing times. They will continue to do so for the new millennium with their innovative design and quality as their main focus.

Just how did Al Merrick gain such knowledge and experience about shaping surfboards?

Al Merrick was born in New Jersey in 1944. When he was 7, his family moved to north San Diego County. He was 14 when he began surfing. His move to Sta Barbara when he was 21 led him to meet Australian Bob McTavish.

That was when Bob introduced his newly designed short surfboard to California. Witnessing the possibilities offered by smaller beards, Merrick got inspired to shape. He did so in 1969. He made boards under the Channel Islands and started selling them through local surf shops.

Fast forward to later part of his life, he was named the top shaper in the world by Australia’s Surfing Life magazine for 1992, 1993, and 1994. He ranked number 11 in their list of most powerful people in surfing and was also among their list of 10 best shapers of all time.

To date, Channels Islands Surfboards together with Al Merrick continue to be motivated by their desire to create cutting-edge surfboards for both advanced and average, everyday surfers that have more user-friendly designs that are geared towards fun.

Channel Islands Surfboards, while allowing you to build a custom, also have different lines of products under their name. You have a wide range of choices to choose from.

Their long list of surfboards will leave us days to finish reviewing, so for now, we will take note of the most popular ones.

Channel Islands Fever is a performance shortboard that is designed to go well in various conditions. It is Al Merrick’s pro model for Pat Gudaukas – the American/Lithuanian pro surfer who won several surfing competitions.

Fever has the performance outline that goes really well on performance waves. However, it is not just limited to that as it can go fairly well in rather average waves too.

The goal in designing this board was to make a more accessible tour level performance board that will make anyone who jumps on it instantly feel the speed and enthusiasm for ingenuity. Merrick wanted more speed and drive throughout, so he chopped rockers off the nose and tail to flatten the design and to let it fly.

The single concave and a tail stirred by Channel Islands’ MBM give the surfboard the drive and control off the back (1/3 of the stick), to make it fast while still dominating in huge sections and hollow bowls. It turned out to be reliable and easy to access sweet spot for an all-out flare.

A high-performance surfboard with a twist, Peregrine features four channels through the belly of its board that enhances the element of fun and excitement. Notwithstanding its high-performance outline, fuller Bunny Chow-ish rails that carry foam to the rail, Peregrine is surprisingly capable to run in smaller and average conditions.

It comes into its own when the waves are punchy and powerful. Peregrine can grovel surprisingly well for a shortboard. You can ride it from chest high to good overhead.

The four channels run through the belly doesn’t just complement the design but actually gears the surfboard for a fast and powerful ride. The low entry rocker allows you to accelerate gently through the tail.

With the flatter deck that has foam carried to the rails means it has more volume than the outline implies. It helps with the single concave bottom that runs throughout the board to the four channels in the belly.

The upgrade from Rocket 9, Rocket Wide is Channel Islands Surfboard’s stick that is a blast to ride from waist high to overhead waves. It is packed with fun and energy making it the best stick to have in your quiver especially if you live in a place where the waves aren’t often that good.

It is easy to like with its wider tail block and more forgiving outline. They don’t hold you back when the wave goes a tad bit bigger and better. Still, it is extremely nimble and can perform well even when the waves are small and weak.

Rocket wide excels on a more open and flatter face waves. But, they are versatile all-around small wave shredder or small wave hybrid. It features a slightly wider outline. The rails are more medium to have a little bit more volume.

Its relatively flat and relaxed rocker is designed low in the nose to keep the entry nice and easy. This blends in well with the wide swallow tail that is performance-focused, and concaves that are slightly relaxed.

Sampler Surfboard is designed to help you “take your good wave game to conditions that are not.” This surfboard does not mind smaller and weaker waves. It comes even more alive in larger (to some extent) and better waves – those that are in the stomach to head high range of waves.

The flat rocker that this surfboard features give more lift in the tip and tail. With deep concave through the center of the board, it gives a little vee for kick off the tail. This concave comes through to the fins, where a minor double concave within is in between the fins.

Sampler bites and releases sharply through turns, thanks to its full and sleek outline in the front. Sampler, as the name suggests, is best for all levels of surfers, especially to novices and intermediate riders.

Channel Islands Surfboards modernized take on the retro fish is their hybrid MINI. Beautiful and smooth down the line, MINI has a remarkably good wave range.

MINI is a performance pitched, streamlined fish design that stretches out of the traditional fish while still keeping that old school rusty and cruisy side. You will be surprised at the amount of versatility it has. This skinny fish design can work best in the smaller knee to waist high waves, even up to shoulder and head high.

And, you can also use it on smaller waves. Steeper faces are handled fairly well. However, above head-high waves should be thought about hard before even trying.

MINI draws inspiration from Al Merrick’s Skinny Fish. Its teardrop plan shape has a wider nose, with the wide point forward, drawing gradually back into a squash tail. The rails that are low and sensitive combined with very flat rocker give the surfboard enormous amount of paddle power.

Despite the generous amount of foam throughout the board, you can still see the foal. The foam distribution is even and it has just the right amount of thickness that runs from tip to tail.

For a lot of surfers, the internet proverb that says “people generally surf better on Merrick’s/Channel Islands surfboards,” holds true. You will be up against pros like Tom Curren, Kelly Slater, and Dane if you dare disagree.

Channel Islands Surfboards is one of those brands that maintain their relevance to the surfing onlookers and audiences by keeping up with the constant change in the surfing industry.

Q: What fins go well with my Channel Islands Surfboard?

To achieve the optimal performance, go for the fins that have the Channel Islands Hex Logo. These are designed particularly for Channel Islands surfboards. For surfers who are 165 lbs and under, the recommended is the Medium 4.5″ template. Otherwise, if you are 165 lbs or over, you can go with the Large 4.75″ template.

Q: Do the Channel Islands Surfboards have an initiative that cares for the environment?

Yes. Channel Islands Surfboards is in partnership with the Ecoboard Project. This allows them to create and produce custom orders that perform not just excellently but sustainably as well.