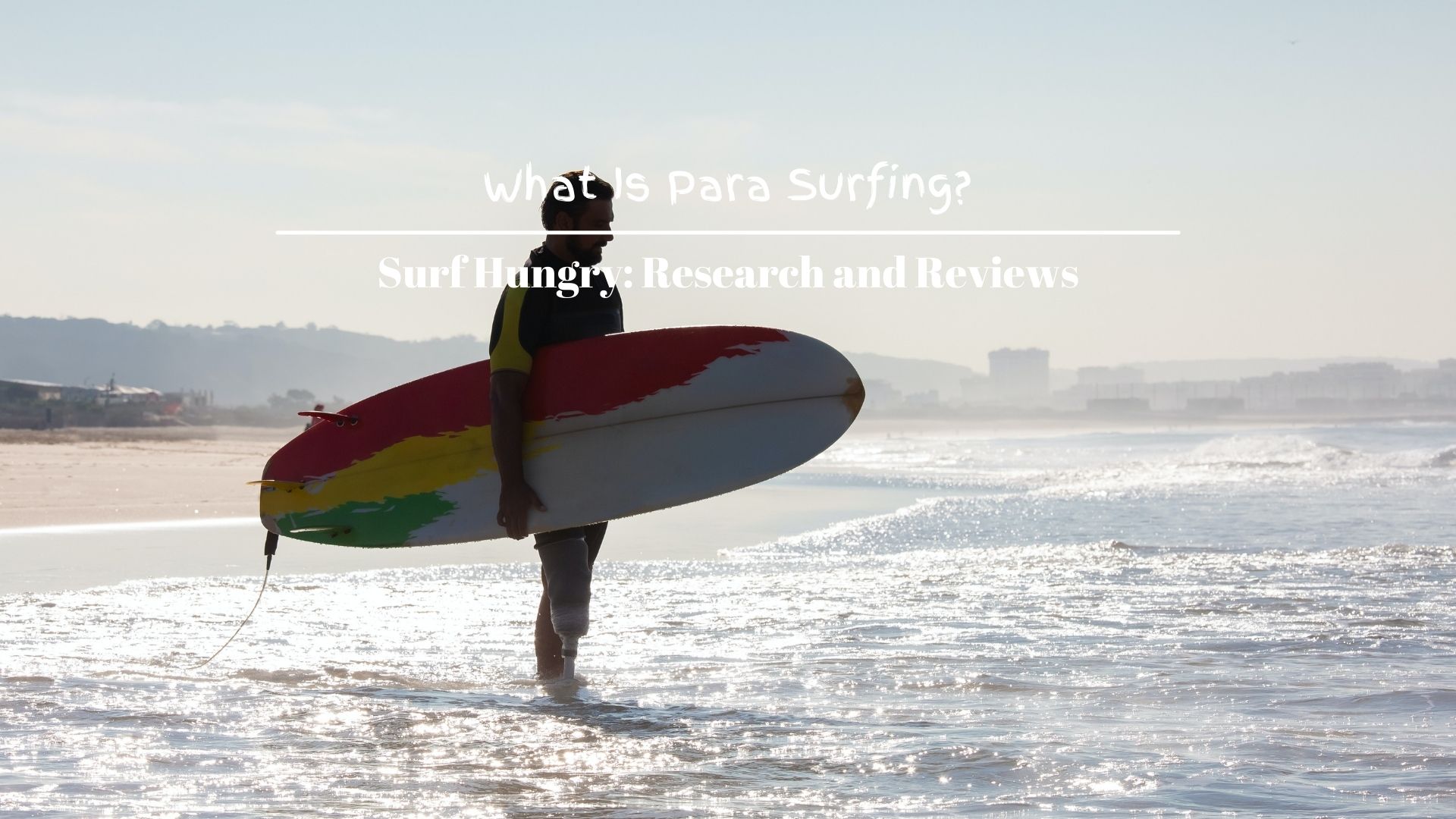 The elite of the para surfing community gathered in Pismo Beach, California, from December 6 to 11, 2021. For the sixth edition of the International Surfing Association (ISA) World Para Surfing Championship, they battled the waves and demonstrated their abilities. Surfers from 24 countries competed, with the International Surfing Association (ISA) hoping that the sport’s expansion will help the governing body achieve its goal of competing in the 2028 Paralympics in Los Angeles.

If you have been a huge follower of surfing, you’d understand this part of surfing particularly caters to our adaptive surfers. But, if you’re new to para surfing and you are looking to find out more, we’ve prepared a good read for you.

What Is Para Surfing?

Para surfing is a modified style of surfing that allows people with physical limitations to surf on a surfboard. The International Surfing Association (ISA) is the sport’s international governing body.

Since 2015, the organization has crowned adaptive surfing world champions. The original categorization of adaptive surfing has transformed into para surfing in recent years, especially when surfing became an Olympic sport.

What Is Adaptive Surfing?

Surfing ocean waves on a surfboard while overcoming a physical restriction is what adaptive surfing is all about.

Adaptive surfing, however, means a lot more to the global community of adaptive surfers, the hundreds of local and international organizations that support the sport, and the army of volunteers who donate their time to adaptive surfing events.

Surfers leaving their wheelchairs and crutches behind to hit the waves are adaptive surfers. Because of developments in board modifications, bespoke prostheses, and the warmth of wetsuits, it is making surfing more accessible to children and adults.

To compete in para surfing events, athletes must have a qualifying impairment. The physical disabilities are specified in the International Standard for Eligible Impairments, as defined by the Athlete Classification Code of the International Paralympic Committee (IPC). 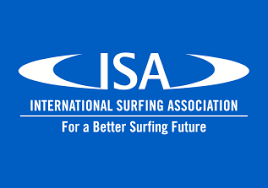 The classification goal is to place each athlete in their best surf class to ensure high competitiveness and a more equitable playing field, reducing the influence of impairments on sports performance.

The ISA Para Surfing Classifiers start by determining whether an athlete has an underlying health condition that could result in an “IPC approved” or eligible impairment.

The classifier panel will determine whether the impairment(s) fulfill the Minimum Impairment Criteria.

Amputated fingers, for example, are regarded as a disability, although missing digits is not enough of impairment to affect surfing. For a list of qualifying impairments, minimal impairment criteria, and descriptions of each Para Surfing Class, see the “ISA Para Surfing Classification Rules & Regulations.”

Surfers with decreased muscle power have an underlying health problem that prevents or limits their capacity to move or create force by contracting muscles spontaneously.

A lack or restriction of passive mobility in one or more joints characterizes surfers with a limited range of motion. Arthrogryposis and contracture caused by chronic joint immobility or trauma to a joint are examples.

As a result of trauma (traumatic amputation), disease (amputation due to bone cancer), or congenital limb deficiency, surfers with limb deficiency have a partial or whole absence of bones or joints (dysmelia). 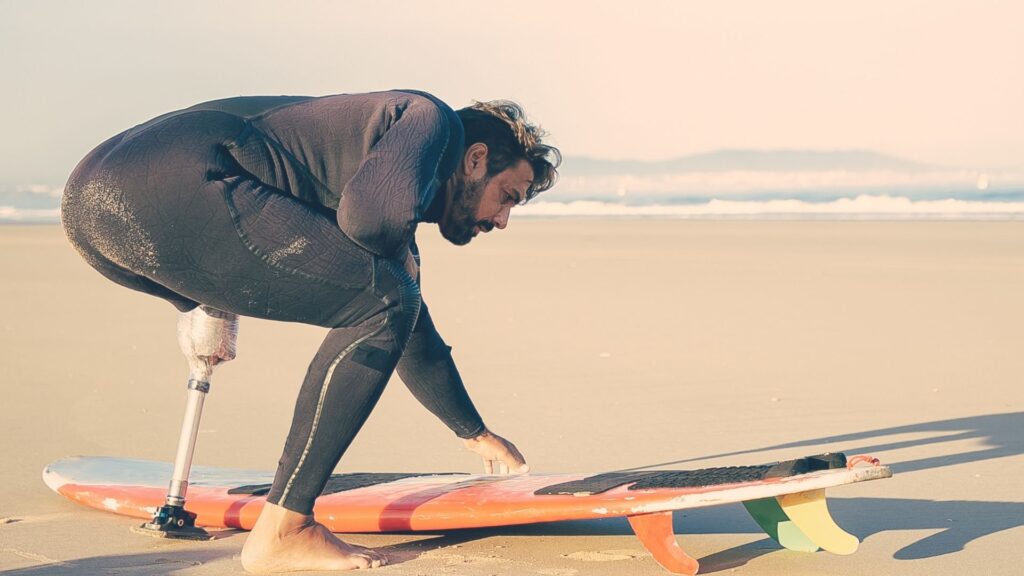 Surfers who have a discrepancy in leg length due to limb growth disruption or trauma are classified under this para surfing impairment.

Surfers who are short in stature and have shorter bones in their lower limbs fall under this impairment classification. Other examples are growth hormone deficiency, achondroplasia, and osteogenesis imperfecta.

Surfers with hypertonia because of injury to the central nervous system have increased muscle tension and a diminished ability to stretch their muscles. Traumatic brain injury, cerebral palsy, and stroke are only a few examples.

Ataxia causes disorganized movements in surfers due to injury to the central nervous system. Traumatic brain injury, cerebral palsy, stroke, and multiple sclerosis are only a few examples.

The eye with greater visual acuity while wearing the best optical correction utilizing spectacles or contact lenses or visual fields, including central and peripheral zones, is used to determine the visual class. Athletes will be divided into the following sub-classes:

All athletes are evaluated and reviewed by the International Surfing Association’s (ISA) para surfing international classifiers to decide if they are eligible, ineligible, or under review.

Para surfers are seeded into their proper sport class when the panel finalizes.

Para Surfing To Be Included in the Paralympics

Following the spectacular debut of surfing at the Tokyo 2020 Olympic Games, Fernando Aguerre, President of the International Surfing Association (ISA), emphasizes the ISA’s drive and ambition to have Para Surfing included on the Paralympic Games sports program.

The International Surfing Association had previously applied for Para Surfing to be included in the Paris 2024 Paralympic Games but was unsuccessful. With the 2028 Olympic Games in Los Angeles as the next possible opportunity to add new sports to the schedule, the International Surfing Association (ISA) is hoping to recreate the historic premiere of Olympic Surfing on the Paralympic stage.

The ISA organized the sixth edition of the 2021 Pismo Beach World Para Surfing Championship from December 6 to 11, hosted by AmpSurf, a significant force behind the sport’s global growth and development notably at the elite level.

Athlete participation has more than doubled since the event’s start in 2015, with 133 competitors from 22 countries representing all five continents competing in the 2020 edition.

On the last day of the recently concluded World Para Surfing Championships in California, the USA won three gold medals.

Para Surfers To Watch Out For

There are many fascinating para surfers to watch out for, such as Dariel Melendez of Costa Rica, who astonished the internet with his one-legged surfing skill. People banded together to help Dariel get a prosthetic limb, and he raced in the Para Surfing Stand 2 division in 2021.

Liv Stone was born with a congenital limb difference, with shorter arms and two fingers on each hand, but that hasn’t stopped her from leading an active lifestyle or competing at a high level, including playing varsity soccer her freshman year.

Even yet, Liv didn’t have any opportunity to surf growing up in Pennsylvania until she attended one of Bethany Hamilton’s Beautifully Flawed Retreats in 2017. She first learned to surf there, and she hasn’t stopped since. 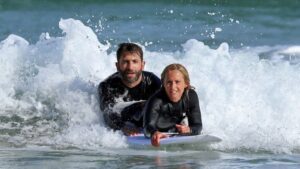 Sam Bloom did not spend her childhood in a wheelchair. The mother-of-three from Australia had everything going for her in life. She had traveled the world as a surfer, fulfilled a lifetime ambition to become a nurse, and raised three sons with her husband, Cameron.

Then, while on vacation in Thailand in 2013, Sam fell through a defective hotel balcony railing, paralyzing her from the chest down and leaving her searching for meaning in her life.

Penguin Bloom, a 2020 Netflix film about her recovery, was inspired by a wounded Australian Magpie chick the family adopted and called Penguin. Sam soon found new meaning in her life thanks to the injured bird, and she was back in the water competing in para canoeing, winning two Australian titles and placing 13th in the world.

She rediscovered surfing in 2018, was picked for the Australian Para Surf Team, and won gold in the Para Surf Prone 2 division at the 2019 and 2020 World Para Surfing Championships. 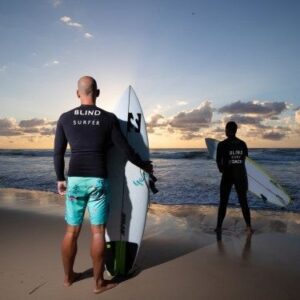 For more than a decade, Matt Formston has been a professional athlete. He began his career in para cycling, winning gold and silver at the UCI Paracycling Track World Championships in 2014 and 2015, respectively, and setting a world record in the Tandem Pursuit event in 2014.

Matt competed in the 2016 Rio Paralympics for Australia, but left cycling to pursue his passion for surfing at a professional level. Matt surfs nearly entirely by feel, despite the fact that he only has 5% vision.

If you were to watch him surf, the only thing that would alert you to this fact would be the words “Blind Surfer” printed on his wetsuit. The man rips himself apart. 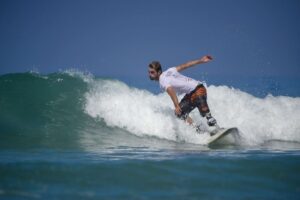 Eric Dargent was surfing off the coast of Réunion Island in the Indian Ocean when he was attacked by a shark and lost his left leg above the knee.

Eric’s love of surfing was unaffected by the attack. He even collaborated with snowboarding amputee Patrice Barattero and an orthopedic specialist to build an action sports-oriented prosthetic knee to assist him in getting back in the sea.

The prosthetic, marketed and manufactured by French company Proteor as the Easy Ride sports knee, is resistant to seawater, cold temperatures, and has a hydraulic shock absorber similar to those seen in mountain bikes. Eric won a silver medal in the Para Surfing Stand 3 division in 2020 due to it.

Regardless of skill level, many people with disabilities have discovered and experienced the sport’s life-changing aspects. Increasing the sport’s reach and audience through the Paralympic platform will help us continue our shared goal of making the world a better place through surfing.

Q: Is para surfing included in the Paralympics