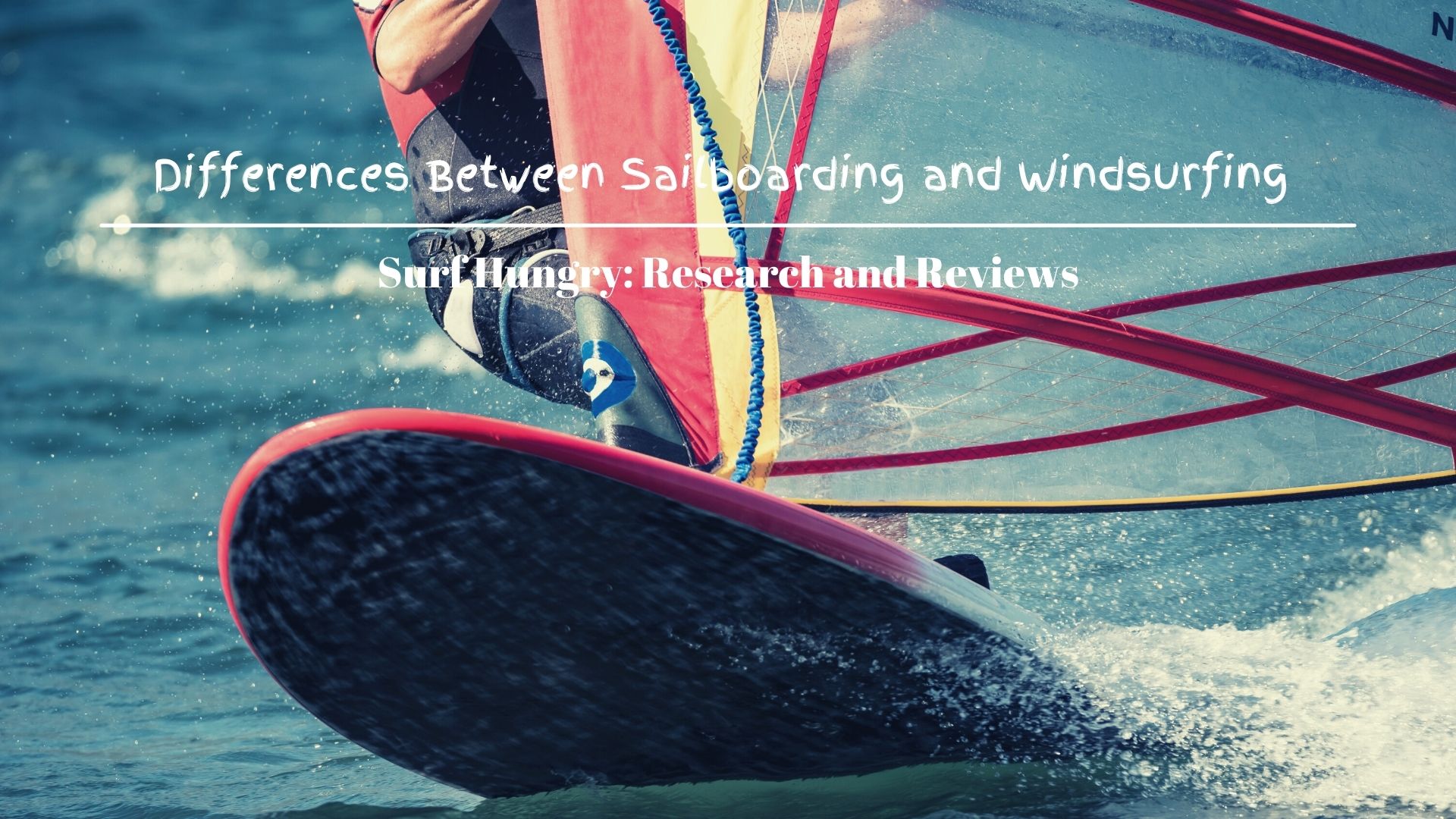 Windsurfing and sailboarding are two water activities that most people have heard of at some time in their lives. Those who are unfamiliar with these names, on the other hand, may wonder what the difference is between these two water sports.

The truth is, the terms “windsurfing” and “sailboarding” refer to the same activity. These terms are used interchangeably to describe a water sport in which participants use a sail to control their boards on the water by harnessing the strength of the wind.

To thoroughly see why these two terms are used interchangeably, it is necessary first to understand some of the basics of the sport. Delving into the origins of these two names and why many people mistakenly believe that windsurfing and sailboarding are two different activities will help us better grasp the differences between sailboarding and windsurfing.

Differences Between Sailboarding and Windsurfing

Sailboarding and windsurfing are generally the same water activity. However, there are a few reasons why casual observers believe windsurfing and sailboarding are not the same thing. The following sections go into these reasons in further depth.

How Are The Terms Sailboarding and Windsurfing Get Interchanged

It is undeniably perplexing to have two distinct names for the same sport. However, once you understand some of the foundations of the sport, these two titles make perfect sense.

To avoid any misunderstanding, we’ll refer to this sport as windsurfing from now on. Just keep in mind that this sport is also referred to as sailboarding. 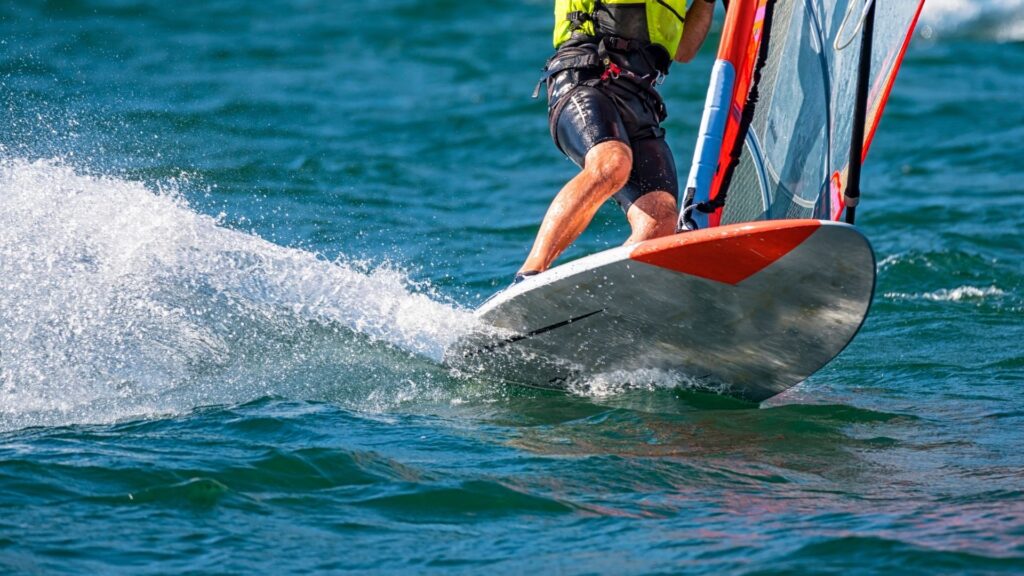 How Did The Term “Windsurfing” Came To Be?

The origins of the name windsurfing have a fascinating backstory.

There was no definitive name for the sport when it first became popular. It was unclear if this activity was classified as a branch of sailing or surfing. As a result, in Baja, California, it was mostly considered an experimental trend.

The combination of the sail and the board was dubbed “Baja boards” by the locals. They were named after the gathering place for all of these early windsurfers.

This went on until Bert Salisbury, a publicist from Seattle, came up and saw the boards for the first time. He had a spark of creative genius after seeing these water warriors whiz around on their boards just using the strength of the wind.

Salisbury went straight to the inventors – Jim and Hoyle Schweitzer, and offered “The Windsurfer” as a new moniker for this cutting-edge board (source).

The creators wisely heeded his advice, and the new moniker stuck. As a result, many people began to refer to the entire sport as “windsurfing.” Within the water sports community, this moniker spread like wildfire.

Why the Name “Windsurfing” Is Appropriate?

Because this sport evolved from surfing, the term “windsurfing” makes perfect sense. The primary distinction is that this sport uses the wind’s strength to propel itself rather than the waves themselves.

The vast sail attached to the board accomplishes this. This can collect wind energy and move the board forward, allowing the surfer to surf over the sea. As a result, this name combines the two components of wind and surfing into a single, simple name.

How Did The Term “Sailboarding” Come To Be?

People coined the term “sailboarding” to describe windsurfing in its early days when there was no official name for the sport.

Newman Darby designed the first windsurf board in the mid-1960s. The universal joint was included in this design, which was significantly more straightforward than the present windsurf board. This allowed windsurfers to freely maneuver the mast and sail on the water, which was a breakthrough at the time.

Darby never received a patent for this concept. He did, however, try to mass-produce and market his board design. This unusual board was dubbed the “Darby Sailboard” to the general public.

Although this business eventually failed, those who bought the Darby Sailboard continued to refer to this newfound activity as “sailboarding.”

When the sport was revived in 1968 by Jim Drake and Hoyle Schweitzer’s new, creative design, these individuals continued to refer to the activity as sailboarding. People took notice, and this moniker began to be associated with windsurfing.

Why Is “Sailboarding” An Appropriate Name?

The word “sailboarding” is also a reasonable choice for the activity because it refers to the riders’ vessel to navigate the water.

The phrases windsurf board and sailboard are interchangeable, just as windsurfing and sailboarding are. Furthermore, it is simple for those unfamiliar with the sport to imagine the riders’ board to get out on the water.

This name is based on how other sports are labeled, including a detailed description of the equipment utilized. Basketball, for example, is the name given to the basket and the ball, which are the two most essential pieces of equipment in the game. The necessary equipment of the sail and the board is sometimes referred to as sailboarding.

Why Is Windsurfing & Sailboarding Perceived As Two Different Things?

Rarely Do Sports Have More Than One Name

There aren’t many situations in which more than one term is used to describe the same sport in water sports, or sports in general.

Water skiing, for example, is unique in that it represents only one type of water sport and has no other discernible term. This makes it far easier for people to recognize the sport.

The exception to this rule is windsurfing. As a result, when these two names are used in the water sports world, it’s only natural for people to assume they’re talking about two different sports. Given how few other sports have this issue, it’s difficult to blame them for forming this assumption.

Sailboarding and Windsurfing Sound Different From Each Other

To put it simply, the terms windsurfing and sailboarding do not sound the same. These names are made up of wholly different words and don’t appear to share any distinguishable traits based on their names alone.

People would be far more aware that these terms refer to the same activity if their names indicated that they had some sort of obvious link.

Take, for example, the sport of lacrosse. If you’re familiar with the sport, you’re probably aware that players and coaches refer to it as lacrosse or lax. Because one name is the abbreviated form of the other, it is much easier for people to connect these two names.

Windsurfing and sailboarding have little resemblance in terms of terminology, making it difficult for people to establish the link immediately away.

“Sailboarding” Or “Windsurfing” – Which Is More Commonly Used Name?

Although the terms are alike, most people refer to this sport as windsurfing rather than sailboarding.

Moreover, windsurfing appears to be the more appealing name of the two. The thought of controlling the element of wind and translating it into speed on the water appeals to many people. It’s what sets the sport apart from the rest.

The combination of wind and surfing also lends itself to more extreme meanings than sailboarding’s name suggests. More and more riders are gravitating toward the extreme side of the sport as the years pass. Windsurfers take great pride in their sport’s extreme character, and they want the rest of the world to know how dangerous it is.

In comparison to sailboarding, the name windsurfing helps to effectively communicate the underlying sense of danger.

Are Sailboarding and Windsurfing Known by Other Names?

Now that you know that windsurfing and sailboarding are the same thing, you’re probably wondering if there are any other names for this pastime. Of course, you don’t want to have to deal with this problem again!

We’ve only seen wave sailing, funboarding, and wind gliding mentioned sporadically in terms of possible names. “Wind gliding” was used more frequently in the 1980s, when the Windglider Class was the preferred board for windsurfing at the 1984 Olympics.

However, these terms aren’t heard very often these days. Instead, most people refer to this sport as windsurfing or sailboarding. Furthermore, the term “wind gliding” has become synonymous with the sport of hang gliding.

It’s possible that the name sailboarding will be converted to boardsailing on occasion, but you should be able to connect the two names relatively simply.

The healthy argument over whether to call it windsurfing, sailboarding, or boardsailing is still present today. The truth is that the term sailboarding is no longer widely used and is mainly associated with elderly sailors.

According to Google Trends, windsurfing is by far the most popular name, with a 60 to 1 ratio of people who know what it is. Whether you call it windsurfing or sailboarding, this sport is a thrilling spectacle on the waters!

Q: What is the difference between windsurfing and Windfoiling?

A: Windfoiling is similar to windsurfing, but instead of a fin, a hydrofoil is used. The foil allows you to soar softly and calmly above the sea in relatively little gusts.

Q: What do windsurfers use?

A: To get into windsurfing, you’ll need quite a bit of gear. The board, sail, mast and mast base, rig, boom, and uphaul line are required. You’ll also require safety equipment such as a helmet, wetsuit, water shoes, lifejacket, and buoyancy aids.

Most Famous Surf Gangs in the World (2022 Update)

What Is a Thalassophile? | Signs You’re Connected to the Ocean