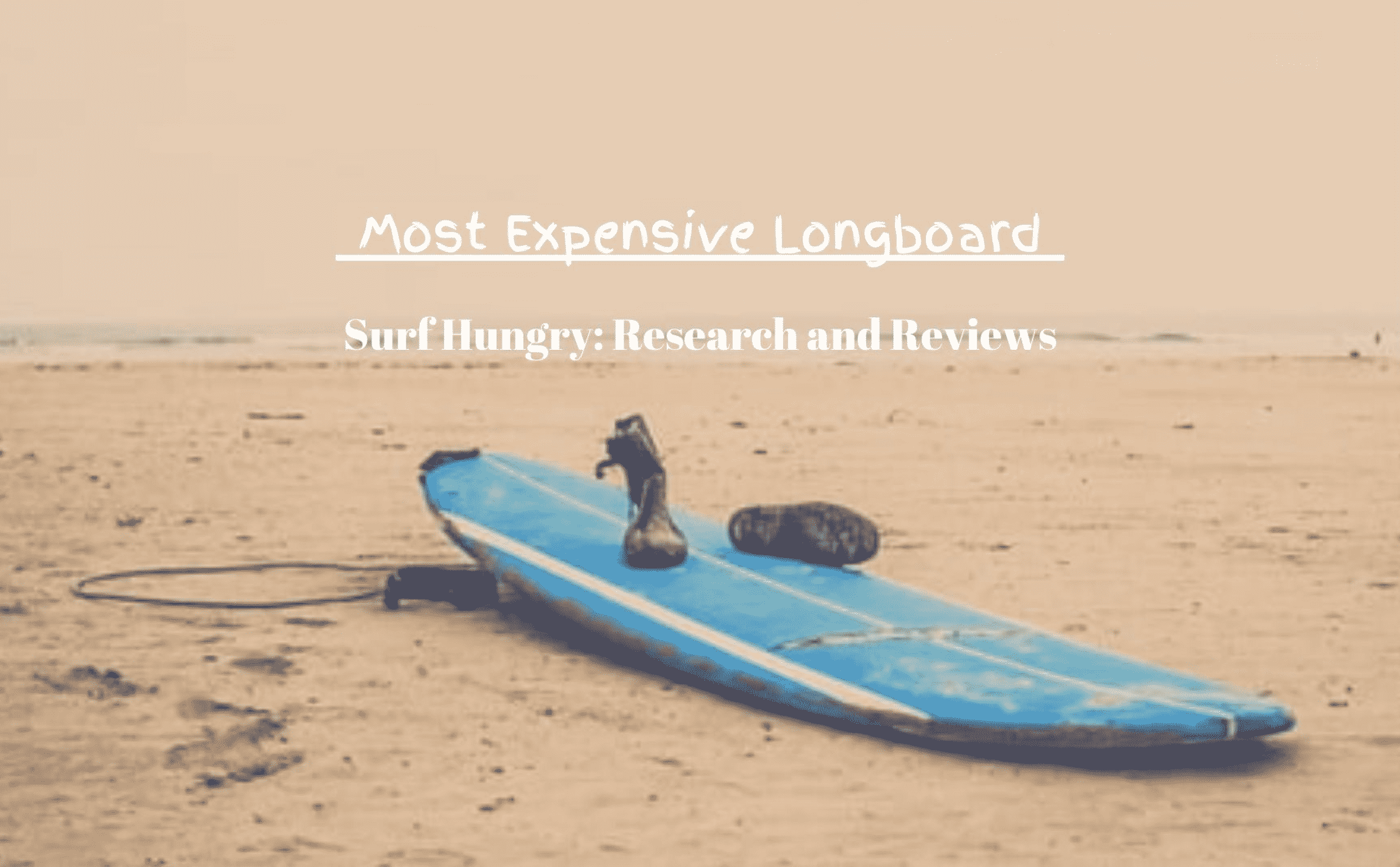 One of the most famous water sports nowadays is longboard surfing or longboarding. Many water sport enthusiasts and even surfers want to try this sport for the thrill that it gives. Essentially, it is called a longboard because it is longer than a typical surfboard. Throughout history, longboards became more popular because of its easy navigation compared to shortboards.

In this article, you will know the most expensive longboard in the entire surf history and why it’s as valuable as your house and lot. We will also tell you why you should try longboarding yourself and know the difference between longboarding and surfing. So sit back, relax, and enjoy reading!

The Rampant: Your Complete Guide

You might have heard of the name Roy Stuart if you are a surfing enthusiast. But if you don’t know him, he is an Australian surfboard designer who creates stylish yet well-designed and well-engineered surfboards. With his more than 20 years of experience in the surfing industry, he became one of the most respected surfboard makers in history.

Roy Stuart is known to design the unique surfboards, making them from the most exclusive materials, such as the Kahikatea wood and the Paulownia. He also happens to be the designer of the most expensive longboard in the history of surfboards.

The longboard is made from Paulownia wood, from a tree that’s native to Asia. The board measures 10ft 6in long and 2.38 inches thick. It also appears to have a single concave that stretches down to the tail from the nose, and there is a reason why it was designed like that. The concave design allows the surfer to have a low center of gravity.

Aside from the Paulownia wood that was used on the board, the Kahikatea wood, native to New Zealand,  was also used on the tunnel fin. The tunnel fin is found under the board and measures 6 inches. The board also has a perforated polycarbonate fin that provides acceleration for the surfer.

Although the perforated polycarbonate fin looks a little off compared to the wood parts, there is a reason why it’s a need. Aside from the increased acceleration of the board, it also offers excellent performance and creating balance on the smooth ride. The tunnel fin, called the Vort-X, along with the single fin, creates an effortless turning and trimming when used for surfing

With all the features that it has, you might still consider hanging the Rampant on your wall if you discover that it costs a whopping $1.3 million. So what makes it expensive aside from the design and the craftsmanship? It is the 23 karat gold lion outlined in red resin on the front of the board.

Although it’s characteristics as a professional longboard suit your surfing needs, its price would instead hold you back.

There are different sizes and styles for surfboards, and each has different usage. You may be confused as to why the longboard differs so much from the shortboard. This section might help you understand why the Rampage is considered a longboard and not a surfboard.

Shortboards or the standard surfboards are more comfortable to maneuver if you are a pro, and it is also more performance-oriented. It’s easier to maneuver, it’s better for big, steeper, and more powerful waves. Also, whenever you encounter more massive waves, the shortboard is better at duck diving.

Because shortboards are, well, short, it is easier to store and to travel along. It is also lighter than the longboard, and it has more fin and nose options.

But along the benefits of a shortboard, it also has some shortcomings. Shortboards are more difficult to paddle and to stand on. It is less stable than the longboard because it is much more difficult to control and balance. It also does not do great on beginner waves.

Compared to shortboards, longboards are very easy to maneuver and control. With this, it is recommended for beginner surfers because it is more accessible to stand-up and paddle. Because of the long length of longboards, it provides stability to the surfer, allowing them to catch small and gentle waves.

Longboards also have more surface area giving the surfer a better chance at catching speed and waves. But since it’s a big board, it is heavier, harder to travel with, and challenging to move around after a fall. Also, since it’s more buoyant than a shortboard, you’ll have the difficulty of diving under waves.

Why Every Surfer Should Have a Longboard

Many surfers say that longboards will give you the thrill that many standard surfboards cannot provide. Among others, the ultimate essence of longboarding is the style. So why should surfers try longboarding at least once in their lives? Here are the reasons why.

Compared to the standard surfboards, longboards can easily balance on waves since it’s a big board. Make sure not to sit far enough to the nose of the board or fall off-balance.

Even though it’s a huge board, it can still catch small waves because of its single fin feature. So if you are a surfer who just wants some chill waves, you can try the longboard.

For surfers, smoothly gliding over water is a heavenly feeling, and you will most likely feel that with the longboard. Since it provides a great balance, you will mostly just slide through the water.

If you are a surfer who hasn’t been surfing for quite some time now and wants to go back to the waves, the longboard is the best comeback gear. Since the longboard is quite easier to maneuver than the standard surfboard, you will not have a hard time transitioning soon.

The longboard has a single fin tunnel that allows you to trim and turn through the water perfectly. Because it’s easy to maneuver, the longboard would be a great start-up for beginner surfers.

It is never too late to learn. The longboard is a great start-up board for surfers who want to start surfing but are already a little old.

Features of the Most Expensive Longboard

The most important material used on longboards is the wood. Some surf shapers use wood like the Balsa because it gives a high strength-to-weight ratio. But a few longboard designers like Roy Stuart use scarce wood like the Kahikatea and the Paulownia. Other surf shapers, however, use fiberglass combined with foam and balsa stringers.

Others use epoxy for longboards’ mass production but are not recommended for windy weather conditions because they are lighter than wood longboards. But, of course, the best longboard would still be made from wood.

The usual length of longboards is from 8 feet to 14 feet. Standard longboards have better glide and more relaxed paddle. It also makes a better board for small to big waves. But longer boards are not recommended for beginners because those are difficult to maneuver. For the Rampant, it measures 10 feet 6 inches, which is the usual length.

The volume of a longboard primarily affects its buoyancy while on water. The volume is determined by how thick the board is. Most longboards have 70-100 cubic centimeters volume, and thickness can be from 2.5 to 3.25 inches in the middle. Buoyancy affects longboards significantly because it will glide better and maintain board speed if it is more buoyant.

The shape is an essential feature of the longboard since it dramatically affects the performance of the board. The nose and the tail designs depend on the ride that you want when surfing. Flat nose and square tails produce better nose riding, while boards with narrow noses and pintails create more speed and higher performance. The Rampant, on the other hand, was built to have better speed and high performance.

Longboards that are narrower are faster and are excellent in big waves. The rounder boards are slower than the narrow boards and don’t do well in big waves. The Rampant longboard is quicker and better in bigger waves because it is narrow.

The weight of a longboard is greatly affected by the materials used, the shape, and thickness. Boards made of wood are generally more massive and can weigh up to 40 pounds. On the other hand, mass-produced longboards have lighter weight since most of them are made from epoxy or foam and fiberglass.

The Polynesians were the first recorded people ever to ride a longboard since they treated these logs as a status symbol. If you think about it, that’s how old longboards are. Then in 1907, a Hawaiian named George Freeth introduced surfboard to the Americans when he first brought it to surf at Redondo Beach in California. After that event, many then tried to do surfing.

The 1930s were also the times when longboards began its innovation. Balsa wood became a new material for longboards to make it lighter and easier to transport. Hawaiians also added tails to speed up the boards. Then, Tom Blake created the fixed tail fin under the board to make it more stable and easier to ride by beginners.

But the rising popularity of longboards was shortlived when shortboards or standard surfboards arrived. Many surfers used the longboard for more than a decade until surfboards became the new “It” in the 70s.

Longboards have been around long enough to become one of the biggest water sports in the world. Although not many people can pull this sport through, longboarding would still be as big as surfing.

The most expensive longboard throughout surfing history gave a whole new meaning to the longboarding industry. With the craftsmanship, the sweat, and the time that the designer put into making the longboard gave justice to its price, beauty, and performance.

Although many people would think that the Rampant would instead be kept than be used, Roy Stuart still feels that it would be better to use the board once in a while.

Q: What made the Rampant the most expensive longboard in history?

The Rampant was made from a rare wood that would only live in Asia. The Kahikatea wood that was also used as a tunnel is native to New Zealand. Along with the materials is the craftsmanship of Roy Stuart and the 23 karat gold lion statue on the top surface of the board.

Q: Is the most expensive longboard capable of riding the waves?

Yes, Roy Stuart made the longboard to have a high performance and withstand trims and turns of the waves. The shape of the board was created to have more speed, too. The tunnel fin creates a better acceleration, combined with the single fin made from perforated polycarbonate.

Q: Who owns the Rampant now?

The current owner of the Rampant is the craftsman, Roy Stuart. The longboard is still for sale, and Roy Stuart is open for any potential buyer.