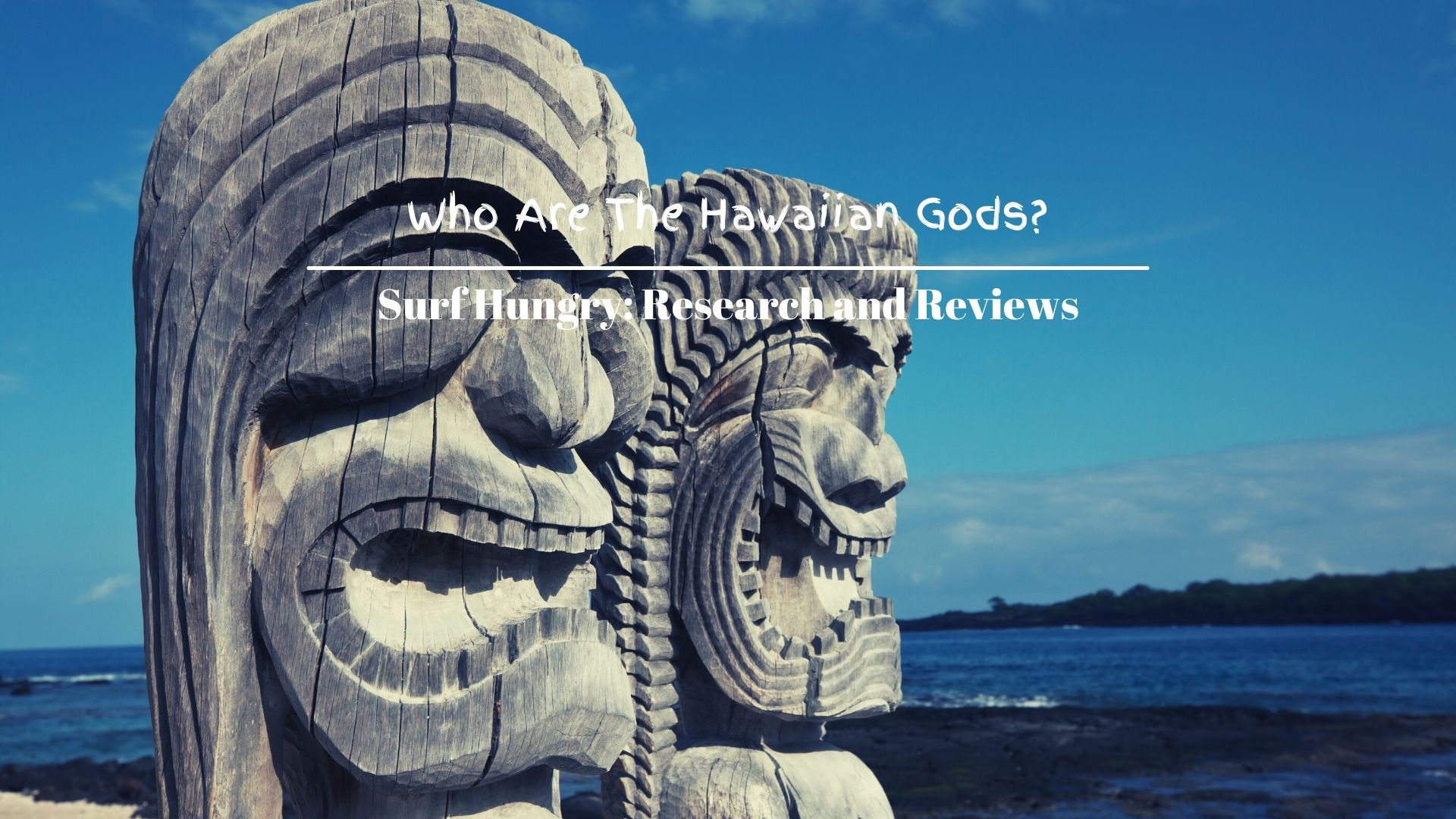 One of Joseph Campbell’s quotes says that “Myth is the secret opening through which the inexhaustible energies of the cosmos pour into human cultural manifestation.” The connection between humans, myth, and nature is apparent in Hawaii, once called “The Big Island.”

Hawaiian mythology isn’t just a piece of history from long ago. It’s a widespread spiritual belief among many of the island’s indigenous people. Hawaiian kahunas’ (or priests) ancient chant – the epic Kumulipo traces humanity’s origins to a cosmic night believed to be the concept of biological evolution.

Let’s take a closer look at Hawaiian mythology. We’ll learn who are the Hawaiian Gods and goddesses, and we’ll see how many of the island’s best attractions are linked to old stories.

Who Are The Hawaiian Gods?

Hawaiians still follow the ancient Hawaiian religion and mythology. Kāne, Kanaloa, Kū, and Lono were the four main Hawaiian gods of the people and the chiefs in the past and present. Each of these Hawaiian gods is different, and each community worships a different version of them.

Kāne: The God of Creation and the Sky 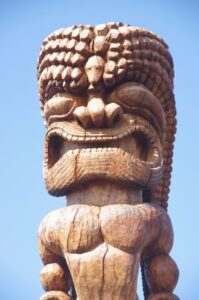 Kāne was the creator and the god of light in Hawaiian mythology. He was also a significant person in the world. Each time Kane is used in a title, it means the creator god. A lot of places where he lives call him “Tane.”

He lives in Tahiti and New Zealand, as well as southeast Polynesia. People prayed to him as the god, gave him Kapa cloth, and gave him small amounts of alcohol.

There are a lot of myths about Kāne, who is said to live in a floating cloud between earth and heaven. Kāne is said to live off Kauai’s west coast. Kane-huna-moku, or “hidden land of Kāne,” is the place’s name.

It was thought to be the place where the sacred water of life, which has magical properties like making people rise from the dead, was found. In Hawaii, the great white albatross was thought to be a god because it was so white.

Some Hawaiian chants were written for Kāne in the 19th century. They seem to have been inspired by early Christians who came to the island. The Hawaiian gods Kāne and Kū, and Lono were thought to be part of a primordial trinity with Kane, where the two Hawaiian gods helped Kane make heaven and earth. In one myth, they made a man and a woman in a land called the marvelous land of Kane.

Kū: The God of War 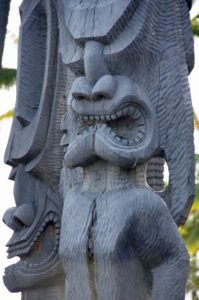 Kū, the Hawaiian god of war, is often called Tu in Polynesia. The words ku and tu mean being stable, standing tall, or rising up. The war god had a high place in the pantheon because there were a lot of fights between tribes and island groups.

In fact, King Kamehameha I was very fond of Kū, and he had a wooden statue of him with Kū when he went on many wars.

In Hawaii, Kū was linked to male fertility and the husband of Hina, and he and Hina were called on in rituals to help people have children.

Lono: The God of Peace, Rain, and Fertility 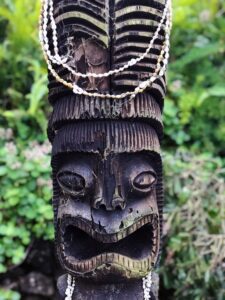 Lono was the Hawaiian god of agriculture, and he was linked to fertility and the sky’s clouds, storms, rain, and thunder. When people call him by his full name, they call him Great Lono Dwelling in the Water.

His symbol was the akua loa, which is a long staff with a carved human figure on top. Its neck has a crosspiece and is decorated with feathers, ferns, and Kapa cloth.

Lord Lono, also known as Rongo or Ro’o in southeastern Polynesia, was also a Hawaiian god who could help people get better. There, he goes by the name of Ono in the islands of the Marquesas. In Hawaii, there were a lot of temples built for him that were used for medical things.

The priests also asked Lono for rain and many crops, especially during the rainy season. The makahiki, which is a celebration of the annual harvest, was named after him because of this.

Many people on the Hawaiian island thought Captain James Cook was their god Lono when he came to their island in 1778. Even the priests held a ceremony in their temples to honor him. In the end, the people in Hawaii realized that he was just like them. A fight broke out between the British and the Hawaiians, and Cook was killed.

Kanaloa: The God of the Ocean 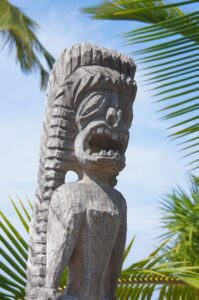 Kanaloa, Kāne’s younger brother, was the god of the ocean and wind in Hawaii. His name is Tangaroa, and he is one of the most important Hawaiian gods in all of Polynesia and is considered the best. However, his authority and roles vary from one island group to the next one.

Even though he didn’t live on the island, Polynesians even thought of him as their creator and main Hawaiian god.

Kanaloa was not as important in Hawaii as Kane, Ku, and Lono as the three Hawaiian gods. This is likely because people later arranged their pantheon to look like the Christian triadic pattern. Hawaiians thought of him as the god of squid, or sometimes an octopus that lived deep in the ocean.

His own temple was not very common, but he was mentioned in prayers and celebrated during a specific time of the lunar month.

People in Polynesia believe Kanaloa was the first person who took the shape of a bird and laid an egg in the beginning. When the egg split open, it became the heavens and the earth when it did. In Samoa, he’s called Tagaloa because he caught the stone from the bottom of the ocean and brought it to the surface.

This made the first land. For example, he’s called the creator god in Tahiti. In New Zealand, he was named the Lord of the Ocean by people who lived there before coming to the country.

Hina is one of the most famous goddesses in all Polynesian islands. She is also in a lot of mythologies. Throughout Hawaii, she was the sister of Kū, the god of the sky and earth. She was also a revered ancestral goddess of the heavens and earth.

She was thought to be the first person on the island before the gods Kane and Lono. As a nighttime guardian, she was the patroness of people who beat their clothes with tapa cloth. It was said in Hawaiian culture that Hina was linked to female fertility, and her husband Ku was linked to male fertility.

Pele is the Hawaiian goddess of fire and volcanoes, and she often shows up in myths as a beautiful woman. Because of her strong emotions, it was thought that volcanoes would burst into flames. She is only known in Tahiti as Pere, the goddess of fire.

She isn’t known in the rest of Polynesia. It’s thought that Pele lives in an active volcano in the Kilauea crater, which is a sacred area.

Hula, the traditional dance that tells the stories of Hawaiian gods and goddesses, was used to honor Laka. Each dance step is a chant or a prayer, and the dancers do it to honor her. She was also Pele’s sister.

She was a goddess of the forest as well. However, Laka shouldn’t be confused with the legendary hero of the same name, also known as Rata, who lived at the same time as Laka.

The Hawaiian fertility goddess, Haumea, has many different names and faces in mythologies. She’s sometimes shown as a sister of the gods Kane and Kanaloa. Other stories say she was married to Kanaloa, with whom she had many children.

In some stories, she’s thought to be Papa, the goddess of the earth and the wife of Wakea.

In Hawaiian mythology, Kamohoali’i is the shark god and the older brother of the volcano goddess Pele, who is also a god of the sea. High-ranking people often see him in human form. He has an important place in his heart that looks out over Kilauea’s Kilauea crater cliff.

It’s said that the ashes and smoke from the volcano never reach the cliff because Pele is afraid of her brother.

In some Hawaiian myths, Wakea and his wife, Papa, are said to have made the islands. Wakea is what people call him in Hawaii and the rest of Eastern Polynesia. In the Cook Islands, he’s called Mangaia, which people call him there.

Ancient Hawaiians had a lot of different gods that they worshiped. The most important gods were Kāne, Kanaloa, Kū, and Lono. There were no more ancient Hawaiians living there when British Captain James Cook found the island in 1778.

The modern era began. There has been a lot of change in religion on the island over the years. Many Hawaiians practice Buddhism, Shinto, and Christianity today.

Today, the Hawaiian religious practices are protected by the American Indian Religious Freedom Act, signed into law in 2006. A lot of people in the area still follow the ancient religion.

Q: What makes the Hawaiian Trinity?

A: The Hawaiian gods Kāne, Kū, and Lono make up the Hawaiian trinity of deities.