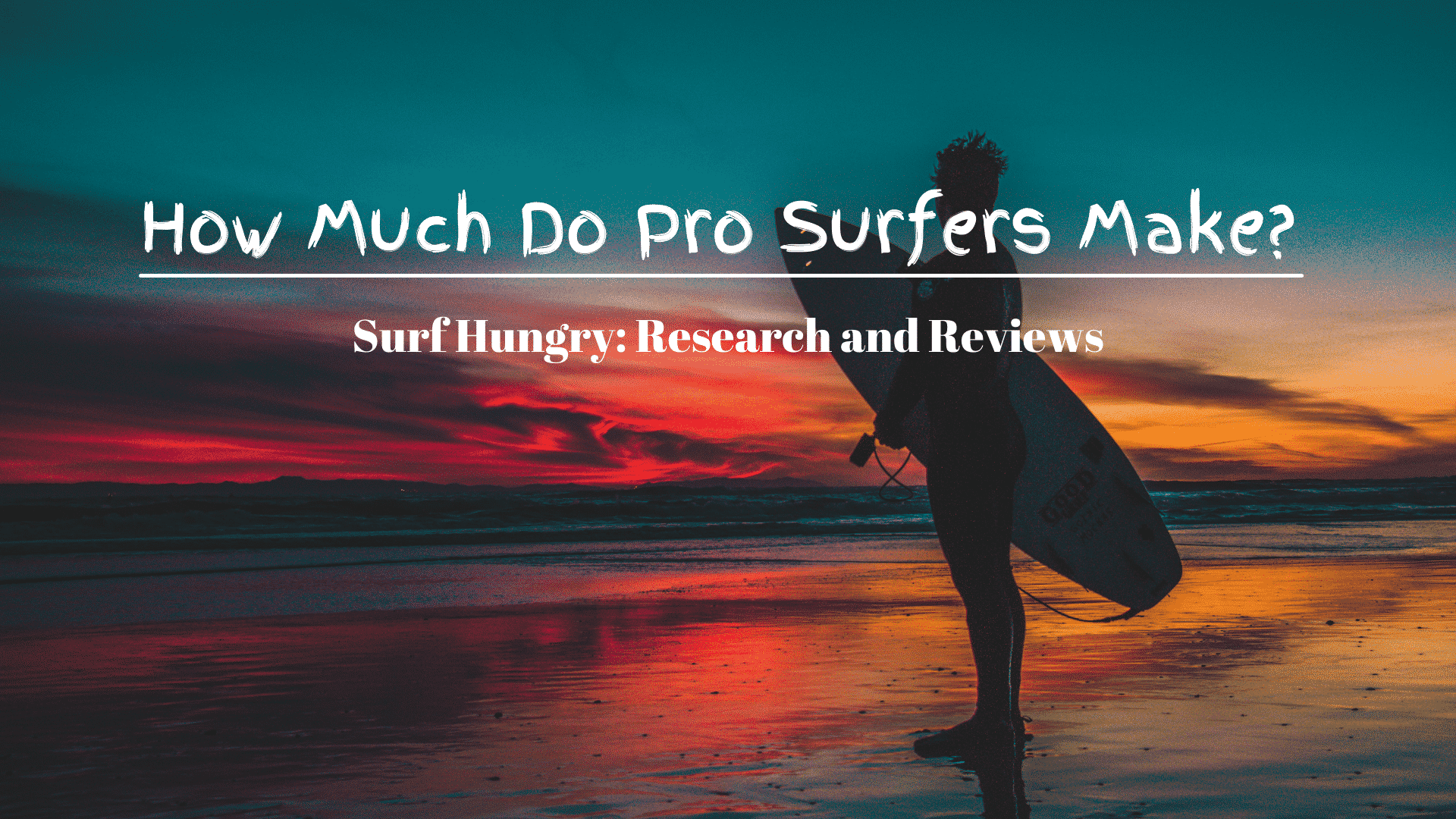 To most of us on the sidelines, professional surfing looks like surfers hanging out and waiting until their turn to paddle out and surf. Pro surfers traveling to exotic destinations almost every month, appearing in surf magazines, and partying mean professional surfing.

“This is the life,” you might say. Is it really so?

It may look like the “dream job.” After all, who doesn’t want to get paid to catch waves? But did you ever wonder how pro surfers make money and how much they earn a year? In this article, we’ll find out about:

But, to answer your question quickly, pro surfers, on average, make between $250,000-400,000 a year, most of which comes from winnings, sponsorships, products, and social media.

How Much Do Pro Surfers Make?

Pro surfers devote their lives not only to traveling and riding the waves but to day-to-day training, too. They wake up at 6 in the morning every day to train, be fit, and be ready for the next competition. But, are they earning enough to compensate for their daily challenges?

Pro surfers, especially those who are ranking, earn prize money, which can add up to a respectable sum when combined with sponsorship income.

Tournament winnings make up the tiniest part of a pro surfer’s income. For instance, the Vans US Open of Surfing, one of the biggest surfing competitions, sponsored by the mega-company Vans, gives a first-place cash prize in the $30,000 to $50,000 range.

That makes you wonder how many competitions do an average pro surfer wins if he earns about $250,000 to $400,000 a year? In reality, pro surfers don’t need to win massive amounts in competitions per year to be part of the top echelon of pro surfers.

In professional surfing, how brands regard you matters just as much if not more than the titles you bring home.

These numbers are why surfers tend to rely more on sponsorships to make it to the top of the highest-earning surfers’ list.

Aside from competition earnings, pro surfers earn money by representing brands. This representation bound by signed contracts and agreements is called sponsorship, much like how the brand Vans sponsors the Vans US Open, only the brand sponsors individual surfers who have been recognized as best of the best.

The brand sponsorship pays the pro surfers to bring publicity to the company. The pro surfers get to travel to different surfing locations and surf. They take video footage and photos of their surf trip that the brand uses to generate buzzworthy content.

Another way pro surfers earn money is from products that bear their name. Australian magazine “Stab” reported Mick Fanning’s earnings of more than $450,000 in 2008 from the Reef sandal he helped design. Mikael Pikon makes money from the surfing underwear he designed with a well-known brand. Dane Reynolds also gets royalties from the surfboards that bore his signatures.

Digital projects also add up to the earnings of pro surfers. Their footages uploaded on video sharing platforms like YouTube rake them salaries, too. So much that it can be surprisingly more than average competition winnings.

When Is A Surfer Considered A Pro Surfer?

Professionally, pro surfing is a pretty new thing. Professional surfing includes those whose careers started when the ASP World Tour began in the early 1980s. Currently, there are more or less 2,000 professional competitive male and female surfers around the world.

But, there are only about 7.5% or 150 of them who make a living off surfing professionally. A pro surfer’s monthly salary or annual income varies significantly on whether he is competing at an elite level or still scruffling to top the qualifying series rankings.

Brand sponsorships and winnings can earn pro surfers at least a million dollars or more each year. It is estimated that surfers on world tours make between $250,000 to $400,000 a year.

However, pro surfers also have to shell out hefty expenses to travel and compete around the world. They also cover the cost of equipment, entrance fees, and dues. Sometimes, sponsors provide equipment, but most of the time, pro surfers foot their own bills.

In short, it’s not all sunshine and roses. There are certainly pro surfers who are living the dream we can only fantasize about. But, there are also those still on the treacherous road like pro surfer Dayyan Neve who in 2007 spent $100,000 of his own money to pay his way to competitions only to win $70,000.

Q: Do male and female surfers earn the same amount?

A: According to the World Surf League rulebook, each Men’s Championship Tour takes a total prize of $607,816. This amount gets divided into 36 competitors. On the contrary, the Women’s Tour only has half the number of competitors making the prize cut in half, too – $303,908. Female pro surfers can decide how the prize money is allocated, so most of the time, it is spread in a more even way than male prize money. For example, the difference in prize winnings between 1st and 13th for women’s events equates to $55,000, wherein the men’s tour has a difference of $88,500.