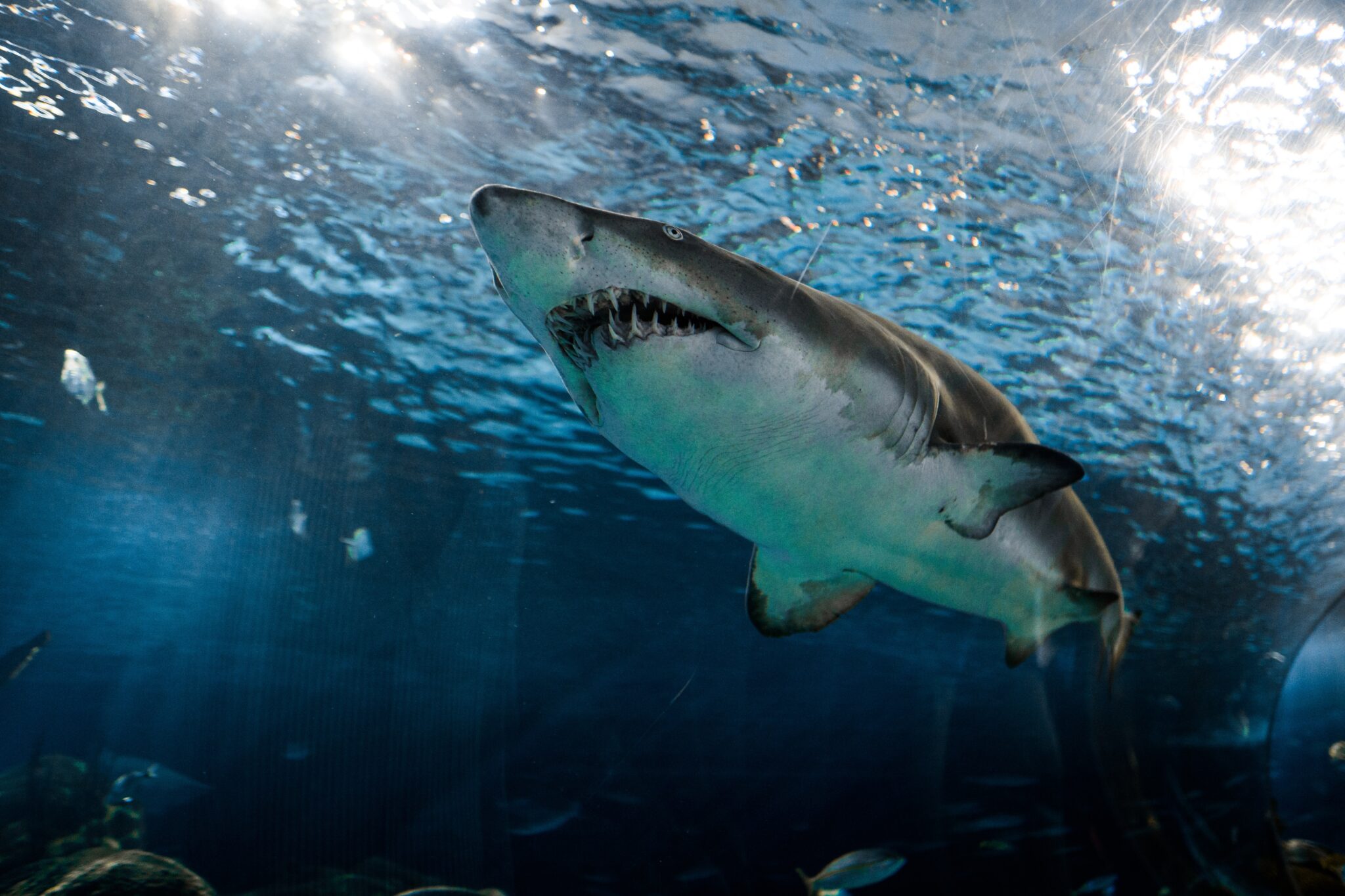 Just when you think that the deep waters couldn’t get any scarier, a viral video from 2014 showed the largest great white shark to be ever caught on film. The beast in the ocean was estimated to be 6 meters or 20 ft. in length, with a weight that’s over 2 tons! The female shark we’re talking about here is ‘Deep Blue’ — or also known as ‘The World’s Biggest Great White Shark’. In this post, we’ll get to know more about her, as well as discuss some facts and evidence to find out if she really is the largest shark we have today.

We all know how dangerous sharks are, that’s why as much as possible, we avoid sharky surfing spots and wear all sorts of deterrents to keep them away from us — but what if one day you encounter the largest shark you’ve ever seen while you’re diving?

That’s exactly what happened to shark movement specialist, Mauricio Hoyos Padilla and his team, when they spotted a massive female great white in Guadalupe Island, Mexico in 2013. However, their first interaction with the shark wasn’t caught on tape, so they came back on the second day. Luckily they saw the same shark circling around them once again, and this time, their encounter was caught on video by Michael Maier.

You’ll see how one of the divers touched the shark’s fin while she took curious bites on the cage. When the diver pushed her away, that’s when they realized how huge the shark was in actuality, and they were beyond amazed. You can watch the unseen footage taken by Maier below.

In 2014, they uploaded the said video and it piqued everyone’s interest, gaining thousands of views shortly after it was released. The shark became an ocean celebrity overnight and was featured in Discovery Channel’s ‘Shark Week’ episode. From then on she became widely known as ‘Deep Blue’.

Unfortunately, Padilla’s team wasn’t able to tag Deep Blue that time, therefore her location and whereabouts are still unknown until today. According to Padilla, however, Deep Blue’s movements are predictable because of the female migration patterns of great whites. Every two years, researchers and experts spot her returning to the west coast of Baja, Mexico where she was first seen to reproduce during the mating season.

Fast forward to 2019, the queen of the ocean made a surprise appearance once again in Oahu, Hawaii where a group of marine biologists tracking tiger sharks found her scavenging food from a sperm whale’s carcass. In the recorded video, Deep Blue’s non-aggressive temperament showed as she calmly approached and swam with the divers as well as several dolphins.

But we all know that sharks are known to be aggressive to humans, so what could be the possible reason behind Deep Blue’s placidity? Turned out, she wasn’t interested in having test bites with the humans surrounding her that time because she’s already fed — and not because she’s an even-tempered sharky.

Model and free diver, Ocean Ramsey, saw Deep Blue’s calm behavior as an opening, so she took the chance of swimming alongside the shark, which she managed to pull off. Because of this theatric, Ramsey became the first person to swim alongside the gentle giant. She even got to touch Deep Blue’s body and get a hold of her fin, which earned a lot of criticism from marine experts shortly after.

According to them, Ramsey’s behavior can be considered as harassment towards the shark who was simply minding her own business during that time. If you look at her actions, you’ll see that she violated certain rules of diving in regards to marine life interactions, such as to not chase an animal and to avoid any form of physical touches.

Aside from that, there are also contradicting facts about Ramsey’s encounter with the massive shark, because based on the shark’s markings and girth, the one Ramsey’s group interacted with wasn’t actually Deep Blue. Instead, it was Haole Girl, a very pregnant lady shark who’s about the same size of Deep Blue.

So how can the experts identify these sharks, you ask? Fun fact: Shark markings and countershading are similar to a human’s thumbprint — no two of them are alike. Deep Blue has noticeable pigments on her body, with a unique grey pattern that meets her white underside. She also has a large laceration on the right side of her body that enables the specialists to distinguish her from the others.

Ramsey’s encounter wasn’t a waste, though. That same year, National Geographic published an article that featured both Haole Girl and Deep Blue as the largest white sharks ever caught on camera.

How big is Deep Blue?

Great white sharks are known as one of the most terrifying apex predators of the ocean, so can you imagine seeing a shark that’s twice the size of a normal one? To give you an idea just how big Deep Blue is, let’s compare her size to other sharks.

In the world of the great whites, the females are naturally bigger than males. The average length of female sharks ranges from 15 to 16 ft., while the males are from 11 to 13 ft. Deep Blue is approximately 20 ft. That’s equivalent to the length of two Christmas trees put on top of each other!

Also, her estimated age when she was last seen in 2019 was approximately 50 years old, and with the life expectancy of sharks that can reach up to 70 years, experts say that she’ll continue to grow in size as she gets older.

This brings us to another question —

Millions of years ago, a prehistoric mackerel shark known as Megalodon or “Big Tooth” swam the Earth’s oceans. Megalodon was considered one of the largest and powerful predators during that era, and with its length that reached up to 60 feet, this beast holds the title as the largest shark ever recorded.

But since there are no videos or photographs of Megalodon (only its fossil teeth and vertebrae), so Deep Blue became the largest shark ever caught on film.

However, David Bernvi, a shark biologist, disagrees with this declaration. According to him, there’s a 93% chance that Deep Blue’s length isn’t actually 20 ft., but instead, it’s only 17 ft. or 5.3 m. This allegation was based on the model they created using Deep Blue’s caudal fin.

Bernvi wasn’t the only one who shared the same thoughts. In 1999 (way before Padilla’s group first spotted Deep Blue), the president and executive director of the Marine Conservation Science Institute, Michael Domeier, had already seen and documented Deep Blue. He claimed that Deep Blue was already considerably large before; however, he has no photo or video evidence of the said encounter.

Also, according to Domeier, he’s seen other sharks much larger than Deep Blue — one was in Farallones and another in Point Conception, California. He believed that since Deep Blue wasn’t ever scientifically measured or weighed yet, there isn’t enough evidence to support the claim that Deep Blue is, indeed, the biggest shark.

Deep Blue is always in continual motion; therefore, the experts can’t just strap and calibrate her with their advanced laser systems. This is also the reason why the records (with valid evidences) of biggest sharks consists of dead ones, well, because they’re immobile already.

Among these great white sharks recognized for their size can be found on the Guinness World Book of Records. A massive shark measuring 36 ft. was captured from South Australia in the 1870s, while another one that measures 37 ft. was captured in Canada in the 1930s.

Meanwhile, the largest great white recognized by the IGFA or International Game Fish Association is the shark caught by Alf Dean in 1959.

There’s no doubt that Deep Blue — while she may not be the largest shark that ever lived — is the largest great white to be filmed and photographed. She weighs a total of 2.5 tons, has a height of about 8 ft. and an astounding length of 20 ft. She was first seen in a viral video uploaded by a group of marine specialists, and from then on became the topic of research and discussions because of her size and unusual behavior towards divers and dolphins.

So, there! We hope that you find this article insightful and motivational to learn more things about the ocean and marine life. But if by chance that this post has discouraged you from exploring the water, remember — humans are more threat to sharks than they are to us.

Deep Blue is from the family of the Great Whites, and these sharks are known to be one of the most aggressive predators in the sea. That said, Deep Blue can be considered dangerous, especially if threatened or if she sees you as prey. It is not advisable to approach any kind of shark.

In a viral video uploaded by free diver Ocean Ramsey, a calm shark can be seen swimming with the divers and dolphins; however, this behavior only happened because the shark was already full from feeding on a whale’s carcass, and not because it’s domesticated. Upon cclose inspection, experts say that the shark in the video wasn’t actually Deep Blue, and instead, it’s another female shark known as Haloe Girl.

Q: Where can you find Deep Blue?

Shark specialists who first spotted Deep Blue weren’t able to tag her, that’s why her locations and movements are still unknown. However, experts spot her every two years in Baja, Mexico because of shark migration and mating season.

The last time Deep Blue was spotted was in 2019 in Oahu, Hawaii. During that time, experts estimated this shark’s age to be 50 years old. Since great white sharks are expected to live up to 70 years, it’s likely that Deep Blue is still swimming the sea as of writing.