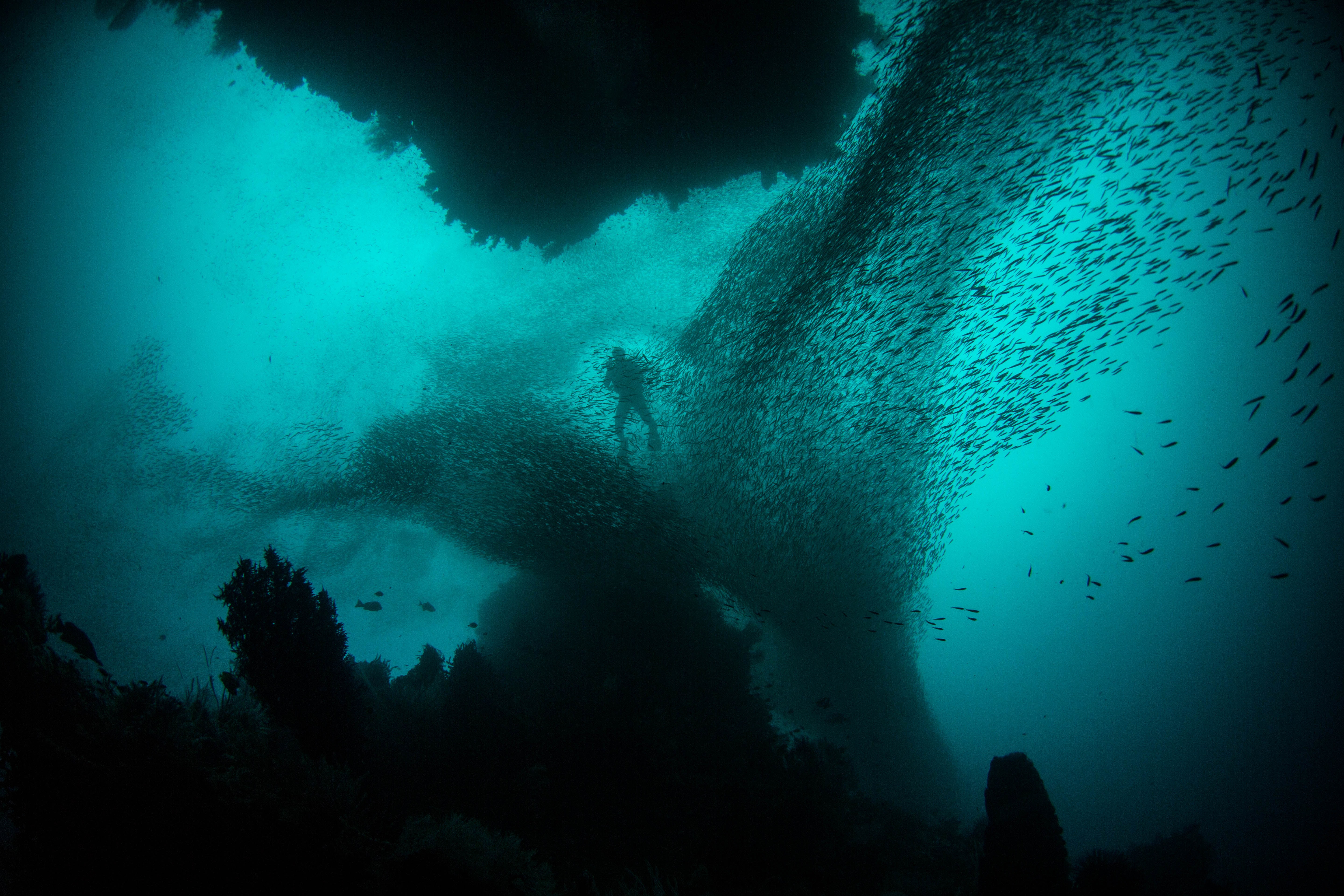 Researchers publish millions of scientific discoveries every year. But did you know that even though we’ve been sailing the oceans for centuries, and exploring space for only decades, we know more about the universe than the deep earth?

Based on NOAA’s studies, only 5% of our oceans are mapped, and 95% of them remain uncharted until this day. The reasons why the ocean remains a mystery are its depth and pressure that makes it nearly impossible to explore.

But over the years, however, oceanographers have developed modern technologies that have made amazing discoveries beneath the ocean’s surface. In this article, we’ll tell you all about it.

The Ocean’s Most Amazing Discoveries

What experts like most about exploring the deep oceans are the stories they tell others about what they’ve discovered. To help them expose their discoveries are advanced technologies that enable them to dive into the deep. Among those are sonar mappings, scientific buoys, ocean satellites, deep-sea submarines, and undersea exploration vehicles (human-occupied, remote-controlled, and hybrid).

So how much of the ocean have we really discovered over the years? Here are the most significant events and discoveries about life in the deep.

The ocean contains trenches, forms that are similar to mountain ranges and canyons beneath the water. They are long depressions in the seafloor as the result of tectonic activities, such as when tectonic plates slide under another plate.

Two of the deepest trenches in the world are the Mariana Trench located in the western part of the Pacific Ocean, and the Philippine Trench in the west of the North Pacific Ocean. Meanwhile, the shallowest trench can be found in the Atlantic Ocean because of its seafloor that consists of continental shelves.

The deepest part of the Mariana Trench is known as the Challenger Deep, a crescent-shaped trench that consists of active volcanoes and openings that vent out liquid sulfur and carbon dioxide. According to records from submersibles and bathymetry, this point has a measured depth of 35,768 to 35,856 meters or 6.7 to 6.79 miles.

To give you a ballpark of how deep Challenger Deep is, let’s compare it with Mount Everest, the tallest mountain in the world.

In theory, if Mount Everest is put in the deepest part of the ocean, it wouldn’t even see the light of day. Towering at 8.84 km or 5.49 miles high, this Himalayan mountain will be submerged in the 11 km or 7-mile long Challenger Deep. With this kind of depth, do you think it’s possible for humans to reach its bottom?

The first person to ever go on solo deep diving in Challenger Deep was the renowned film director James Cameron, who also happens to be an avid deep-ocean explorer. According to him, what surprised him the most about this exploration was when he found plastics and candy wrappers at the bottom of the Challenger Deep.

In 2019, Cameron’s record was topped by Victor Vescovo, Guinness World Record holder and the first person to successfully dive into the deepest parts of all five oceans. This amazing feat was brought by the expedition known as Five Deeps.

Deep in the waters where the sun’s rays can’t penetrate, researchers first believed that life in the ocean’s deepest part is impossible. But as it turned out, they couldn’t be more wrong.

Life thrives when there’s food available, and this is true when it comes to underwater ecosystems. Although food is scarce, marine organisms are able to live off minimal food by having slow metabolisms and consuming minerals from the seafloor. They also rely on what experts call the ‘marine snow’, or the shower of organic matter, remains of decaying animals, and feces that fall from the shallow waters.

A lot of organisms can adapt to deep-sea environments, even with their most extreme conditions. Most fishes in deep zones can withstand depth pressure that comes with massive force because they don’t have air sacs. Instead, they have piezolytes to protect their molecules from getting crushed by high pressure.

Ninety percent of deep-dwelling organisms are also bioluminescent in able to adapt to their pitch-black habitat. Some of them become luminescent because they consume bacteria with light-emitting cells called photophores.

Unusual Creatures of the Deep

The deeper the ocean is, the weirder the creatures become. The following are some of the marine organisms caught on footage by oceanographers. They are animals that don’t require sunlight and some of them are also known to exist for millions of years.

This species is the most abundant vertebrate on the whole planet. In numbers, these fishes can take trillions — maybe even quadrillions! Bristlemouth fishes are often found in the Melosopelagic zones of oceans in tropical regions.

Like some worms and butterflies, this species is characterized by a male-first hermaphrodite attribute known as protandrous, a phenomenon wherein some bristlemouth fish start as male, then switch to female as they grow.

Next, we have the largest bioluminescent vertebrate that’s known today and also the slowest moving shark — the kitefin shark. This fish is characterized by its lobed fins, thick lips, blunt snout, and large eyes that allow it to see in deep seas. They’re often caught by fishermen because of their sizable oil-rich liver, skin, and flesh.

Known for their ghost-like features and unusual body parts, chimaeras are cartilaginous fishes that are known to exist before dinosaurs. They have the slowest evolving genome, hence why they appear to be creatures straight from the Devonian period.

The vampire squid got its name because of its large eyes, dark reddish color, and the skin that connects its arms which kind of resembles a cape. This cephalopod can live in the deep sea’s most extreme conditions because of its bioluminescent organs and metabolism that can adapt to places with the lowest oxygen concentration.

Regular woodlice can be unsightly, so it will be difficult to imagine the giant counterpart of this crustacean. Because of the phenomenon known as deep-sea gigantism,  giant isopods can reach up to 30 cm from their head to their tail. They are also scavengers who live off marine snow and whale carcasses that fall off from the ocean’s shallow parts.

Anglerfishes are sea creatures you don’t want to see when you’re diving underwater. Not because they’re a threat to humans, but because of their unusual appearance that will scare the soul out of you. These bony fishes have crescent mouths filled with long, fang-like teeth that are angled inward for grabbing. They‘re also characterized by the luminescent fin rays that they use to lure their prey.

Facts About the Ocean

The ocean is a huge body of salt water that covers 71% of our planet. Initially, it was subdivided into four regions: the Pacific, Atlantic, Indian, and Arctic. But in 1991, a new one was proclaimed as the fifth ocean by the NOAA — the Southern Ocean or the seas surrounding Antarctica. Thirty years after, this ocean was finally recognized by the National Geographic Society.

Ninety-seven percent of all the water in the world is found in our oceans. Since most of it covers the Earth’s surface, it has a significant impact on the temperature, the weather, and food of most living organisms — one small change in the ocean can affect our entire planet.

There are millions of organisms living in the ocean, but the only known species today are only about 226,000. This leaves 90% of the other species still undiscovered. Their ecosystems are vulnerable, that’s why it’s paramount that researchers explore the ocean to be able to protect their habitats and monitor any threatened species.

The problem is, only 7% of the ocean is protected by organizations because it’s very challenging to monitor its entirety. So why are there only a few discoveries about the ocean?

Below the ocean, the amount of pressure increases as you go deeper. For reference, the deepest part of the Mariana Trench has 1000 times more pressure than shallow water, which is equivalent to having 50 Boeing 747 pressing on your body. This makes traveling down under not only difficult but also extremely dangerous; hence also why researchers find it easier to explore space where the air pressure decreases to zero.

The director of the movie ‘Avatar’, James Cameron, spent over USD 10 million on his single expedition to Challenger Deep. More or less, this is how much money it’ll take to explore one part of the ocean; however, organizations don’t want to financially support expeditions like this because the ocean is too vast. Also, if the expedition isn’t about sourcing oil or other marine resources, private sectors don’t see much profit on it.

Since the deep-sea explorations are limited, the guide terrains and the bathymetric information are often inaccurate. This makes navigating in zero visibility very challenging for oceanographers and explorers.

Outer space is a safer investment

Space is infinite, but it is more predictable to explore than our oceans. The government can leave satellites in outer space and they will remain there for years, maybe even decades.

Meanwhile, deep-sea is unpredictable, and it’s full of big fishes and hidden creatures that could attack the submersibles left and right. Since it’s so vast, much of the exploration footage only consists of endless seafloor.

The ocean covers most of the Earth’s surface, but we know so little of it because of the extreme conditions that make it difficult to chart and map. Some discoveries oceanographers have uncovered over the years are:

There’s so much more that we need to know about the ocean. Discovering everything about it allows us to protect marine organisms and their habitat.

We hope you enjoyed reading this article, and if you’re interested in other unusual phenomena of the Earth, you may want to check out this post about square waves!

Q: Are there plants in the deepest part of the ocean?

There are no plants that grow 1,000 meters below the ocean because the sun’s rays aren’t able to penetrate this depth. In these zones, marine organisms rely on hydrothermal vents or marine snow for their source of food.