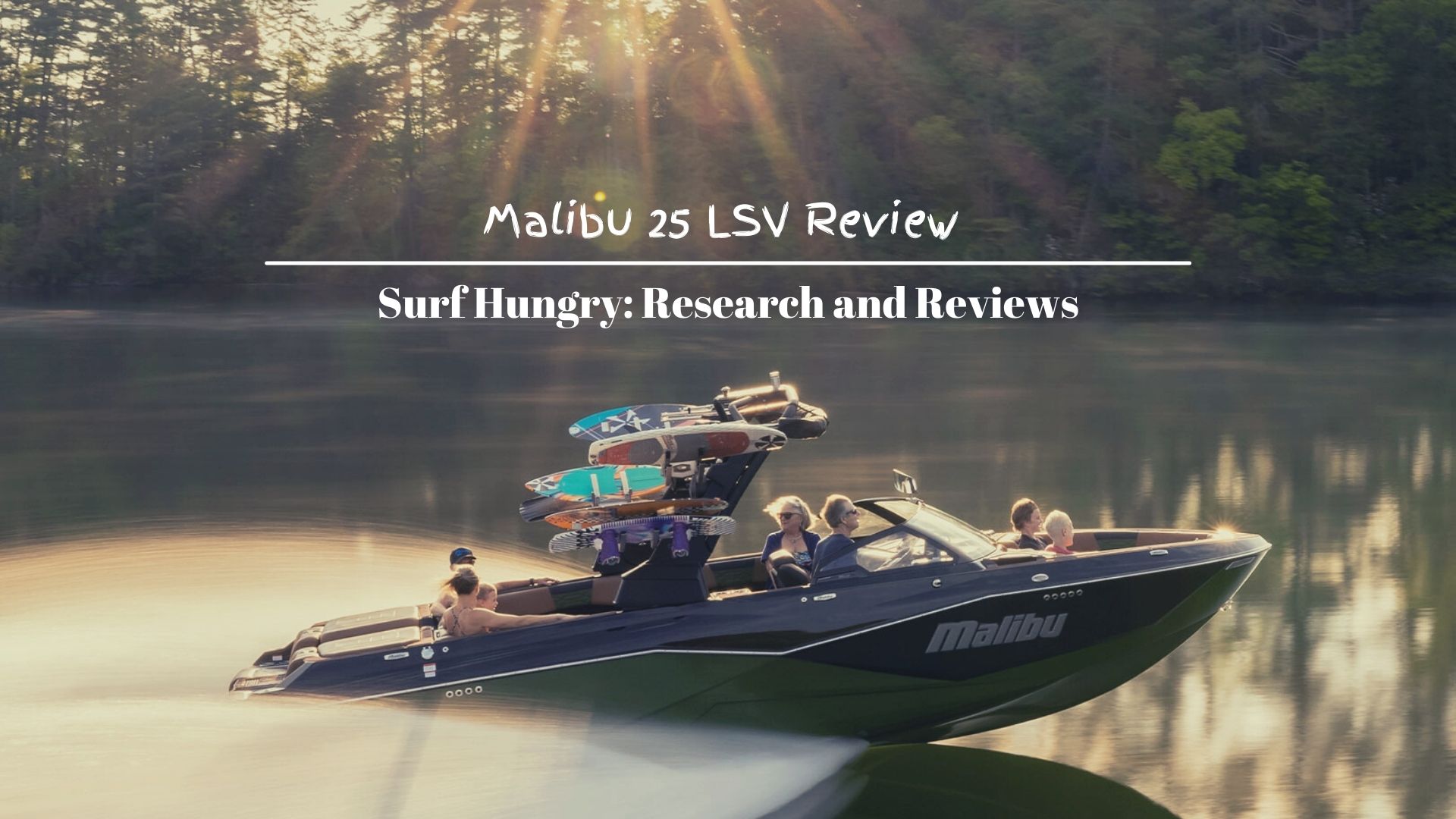 The newest model in the world’s best-selling towboat family, the boat of choice for anyone who wants to include everybody – and then some is the Malibu 25 LSV. Not only is it one of the biggest boats in the inboard market, but it is also one of the best so far.

Malibu Boats made sure you get classic looks, tons of space, and all the luxury this lavish brand has to offer, including the giant waves. The Malibu 25 LSV instantly turned out to be the most sought-after boat. So much that it became the new benchmark in the boating industry.

Let’s take a deeper look at the Malibu 25 LSV and understand how the famous Luxury Sport V-Drive line has it as its flagship boat.

Who Is Malibu Boats?

Malibu Boats is the “world’s largest maker of watersports towboats,” which are used for water skiing and wakeboarding competitions as well as recreationally. You’d think they were as big when they started as they are now. They weren’t.

Using a single-hull design and blended gel coat, “manufacturing began at a modest pace of two boats per week” during the first year of operation. This resulted in the company developing a backlog which caused them to increase staff to compensate for the output.

Malibu Boats was “early to grasp the value of wakeboarding as an offshoot of the classic sport of water skiing” and so positioned to profit from it. It didn’t take too long before it became the largest custom ski boat manufacturer in the world.

The Malibu 25 LSV is powered by the electro-hydraulically actuated Power Wedge II. It comes with two lift modes that offer the equivalent of up to 680 kg of extra ballast by its design. This wedge tilts down and forwards to create a different planning surface that allows the hull to lift faster from the rear.

This invention alone has increased wake size, allowing for changeable height, reduced fuel burn, let the rider get up and move faster to the wash, and improved driver visibility. 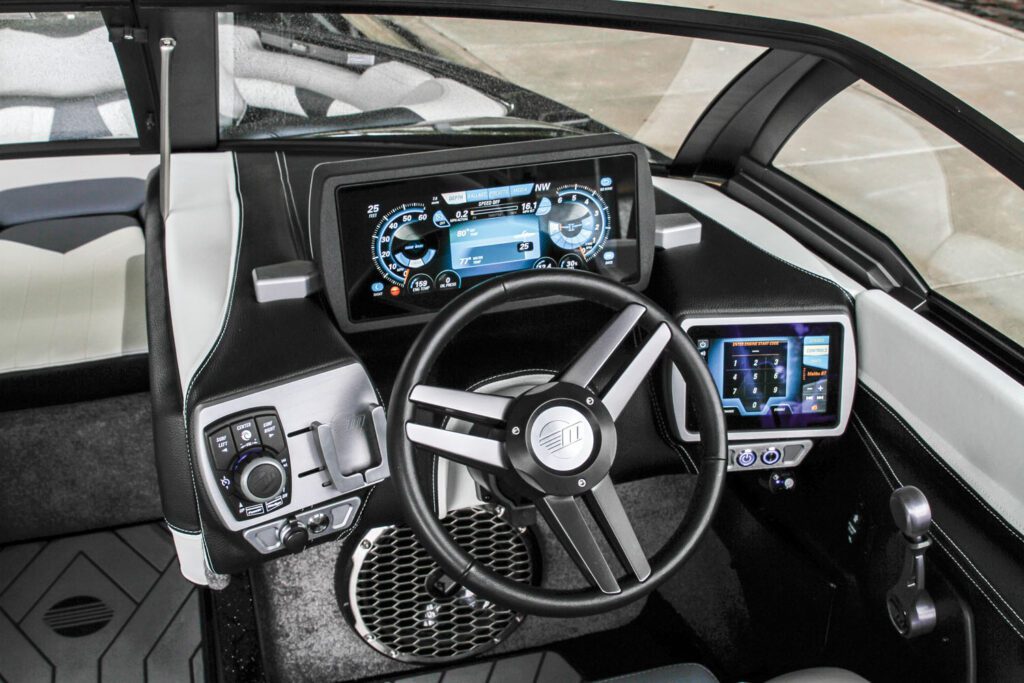 The helm is dominated by a large, high-resolution, glare-proof, and visually attractive 12in touch screen and an additional 7in touch screen for all home features such as lighting and power. The Surf Gate and Power Wedge positions, ballast levels, and various functional controls are displayed on the 12in LCD in a straightforward and inviting manner.

The luxury aspect of Malibu’s whole presentation is reflected in the enhanced design and feel of the 2016 Helm Control steering wheel. The logo is imprinted on the solid center hub of the black stitched leather wheel, encircled on each side by touch button controls for the Surf Gate, Power Wedge, cruise control, and sound system, as well as a functional mute button.

An incredible selection of standard amenities is one of the reasons Malibu Boats is at the top of the luxury sport boat market. the Malibu 25 LSV is a wrist-operated remote control that allows the rider to regulate both sides of the Surf Gate, including the speed and location of the Power Wedge, to form a personalized wake from the board while riding.

The rearview camera, which initiates instantly when you hit reverse, is one of the new features that add to the Malibu 25 LSV’s convenience. This is particularly handy with a boatload of passengers obstructing the driver’s view.

Moreover, the big deep hull creates the ultimate comfort. Its convertible seating options, including the passenger side’s pop-up backrest, can go both forward and reverse positioning. All the moving parts have been manufactured with billet alloy hinge joints for greater longevity. 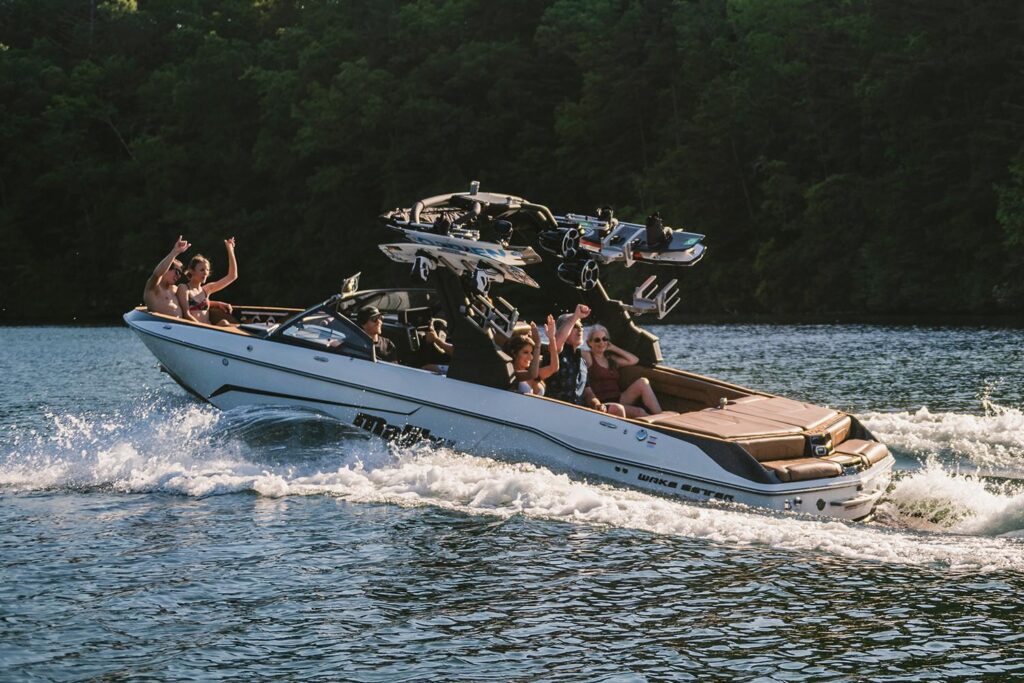 The Malibu 25 LSV isn’t just a boat for riders; it’s also a boat for drivers and a raging machine for passengers. Malibu claims that this is the most popular selling boat in its class, and we bet you won’t disagree — as soon as you sit in the driver’s seat, you will feel like a king.

The significant 6.2L super-charged Monsoon/Indmar V8 this boat has plants the throttles and make it roar into life. Plus, its closed system cooling, which is standard for saltwater experience, expands the usable applications dramatically.

For 25-footers, the Malibu 25 LSV is the new standard. It’s the largest boat in the Luxury Sport V-Drive Series, featuring all the comforts a significant crew needs on a long day.

Even when fully laden with an 18-person crew and topped-off ballast, the sleek conventional bow cuts through big-lake chop, double-ups, and rolling surf waves. Now, the question is, what more will you look for?